As mentioned in my earlier review, I would revisit this place to try either the Laksa or the Buk Ku Teh.
So this time I tried the Laksa, just to compare it with the other places that I had it.

For a bowl of Laksa, it was priced at $60, which is the average Laksa price in Hong Kong for a seafood one.
As shown in the picture, the seafood were the frozen ones as expected with no taste, boiled and placed on top of the noodles when served.

The prawns were conveniently peeled but it didn’t have any prawn taste. 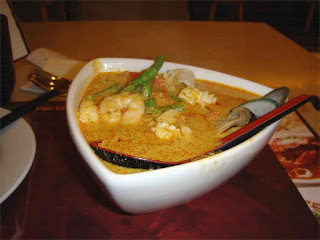 Anyway the laksa tasted better than I expected, the soup was much stronger, it was thick and full bodied, creamy, but not too strong of coconut.
The noodles were the thick white ones like spaghetti, they were soft and flavoured from the soup.
The tofu was slightly harder and chewier than preferred, the soup was not spicy at all, so anyone who cannot eat spicy laksa, can try it here.
=============
For dessert I had coconut banana fritters, the batter was just right, light and crispy, inside with pureed banana, and topped with lots of desiccated coconut. The sweetness was acceptable.
Quite a good dessert too. 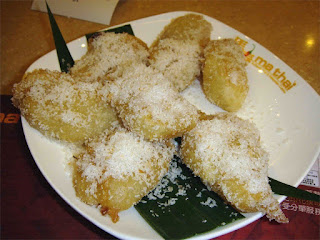