I don't know who is behind this campaign but I love these huge cats and I wouldn't mind having them on my lawn.
The LV one is really stylish with a gold necklace, sunglasses and beautiful eyes behind the shades. 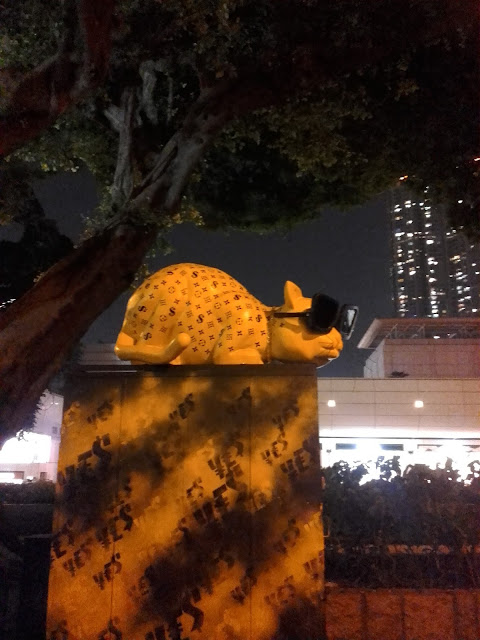 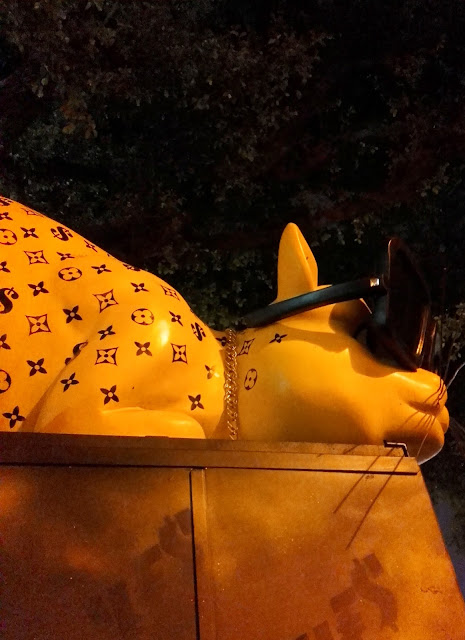 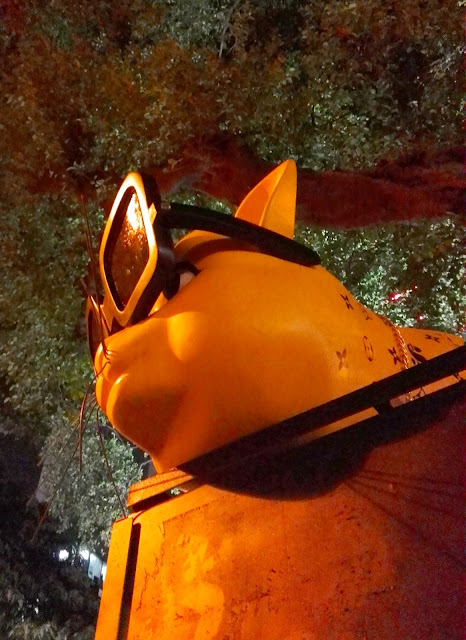 There is another one further down the road. 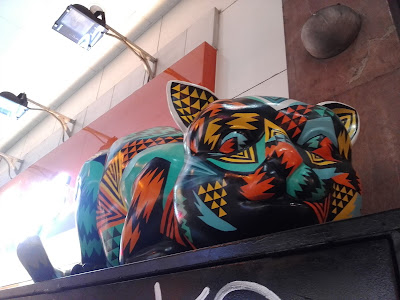 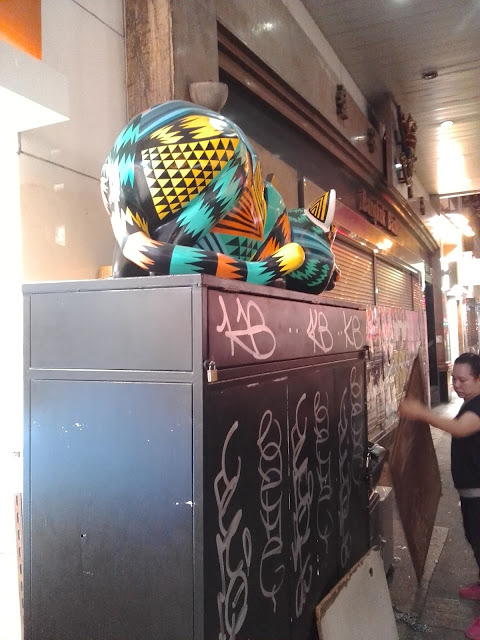 Posted by supersupergirl at Wednesday, April 27, 2016 No comments:

Get ready for an Indian Summer

When I saw Juhu Beach club listed, I thought it was an American bar but it was far more exciting than just a chillaxing restaurant.
What surprised me was that they have branches in the US and the food has an Indian touch to it.
In the US, they have these popular waffles made of Indian dosa batter, which has a different taste and texture.
By just looking at the food pictures you would never have guessed that it was Indian.

I went for brunch and there were so many things to try that I went three times.
Most of the dishes are the same as the US Juhu but some vegetables and fruit may vary because of sourcing issues.
The décor is the same as the US restaurants but I would like to see more of the pretty wallpaper at the far back near the toilets to dominate the whole restaurant.

As for the food, it was quite spicy which is interesting because I didn’t think it would be that spicy.

Anyway, here was what I had over three visits:

Basically it was puffed rice with purple potatoes and local vegetables which is slightly different to the US version.

You pour it in the bowl and mix the sauce together.
I found the sauce quite spicy so I didn't mix it all.
It was a nice spicy crunchy mix with vegetables, pickles and grapes.
++++++
fruit chaat:

This was fruits and yoghurts, a nice refreshing starter.
++++++
classic doswaffle:

I love the doswaffles here because it has a sour taste and the taste is just different.
It was topped with spicy roasted potatoes, coconut chutney and lentil soup.

I thought this was wicked, bacon fried rice but I wish there was more bacon.
Again, this is quite spicy!

This is a must because it is such a delicious vegetarian cheese sandwich with beetroot, chaat masala and tomato soup.

This is similar to the classic waffle but it is not spicy with delicious veggies.
++++++
nutella banana doswaffle:

The banana doswaffle that I had was good because it didn't have mango as shown on Instagram and the nutella was hidden beneath the waffle.

For drinks had the nimbu which is cilantro lemonade and cumin.
An exotic taste I would say.
++++++
Sassy lassi:

The sassy lassi was sweet and savoury with lime yoghurt and mango, great for soothing a hot palette.
++++++
Juhu beach club:
https://www.facebook.com/JuhuBeachClubHK
Posted by supersupergirl at Thursday, April 21, 2016 No comments: 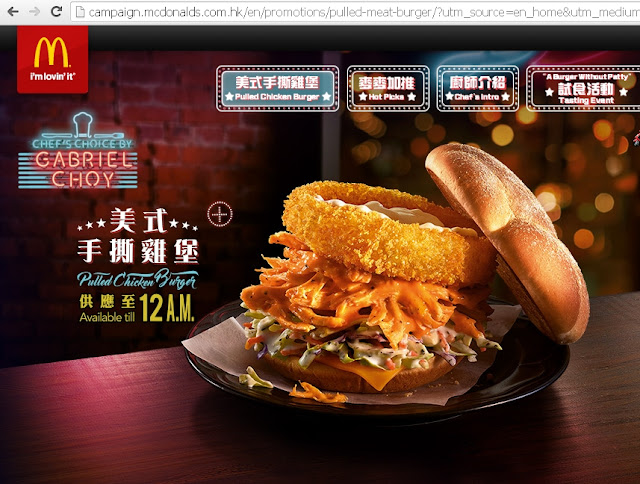 Pulled chicken or pulled pork is actually Southern American cuisine, which is served with coleslaw and smoky bbq sauce or chipotle sauce.

It is interesting that Gabriel Choy has used Tandoori sauce which is not American and the fried onion rings which reminds me of Indian food with onion bharjis.

Anyway, the product shot shows one huge onion ring but there are two in the burgers. 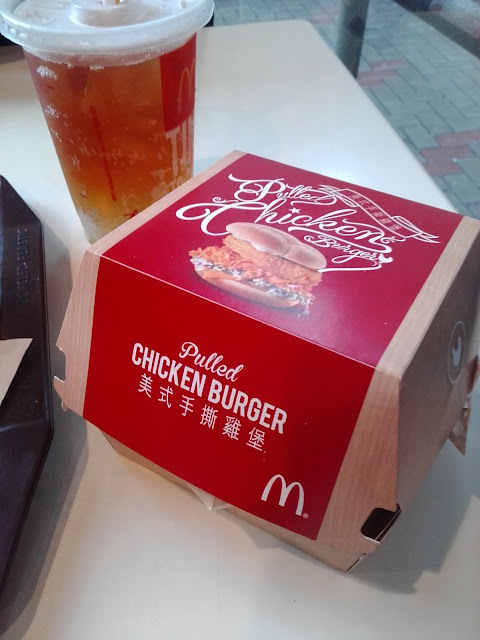 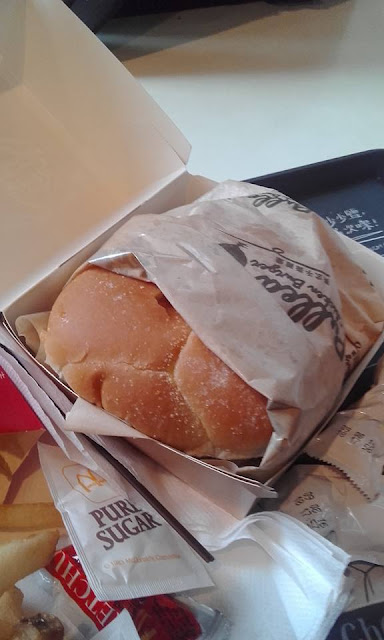 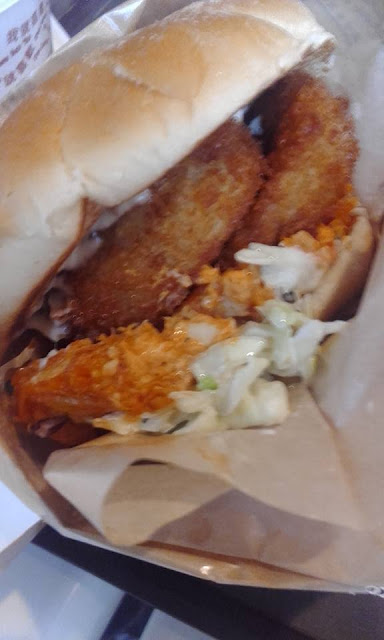 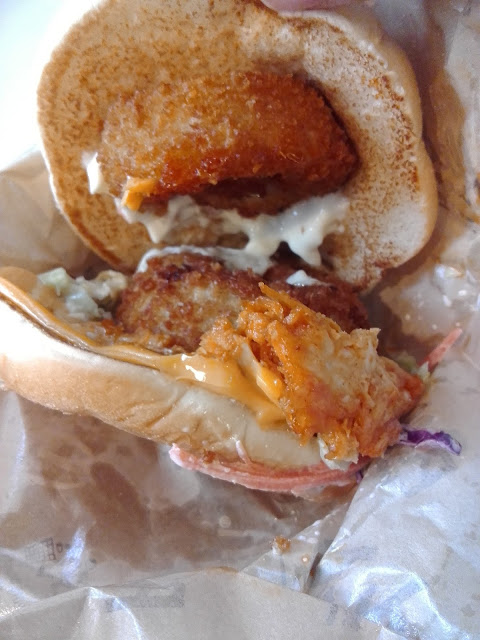 The onion rings and slice of cheese were not really needed because the pulled chicken and cabbage slaw were tasty without them.
The chicken was soft and tender and the taste was similar to Coronation chicken which is creamy and sweet unlike Tandoori. 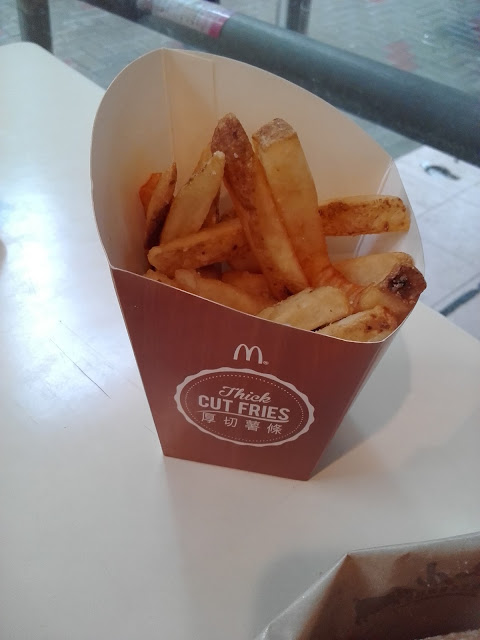 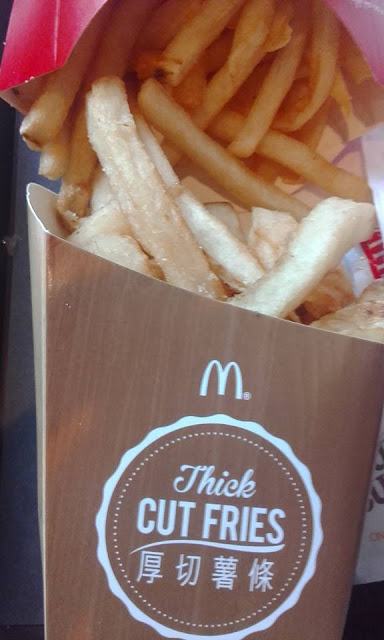 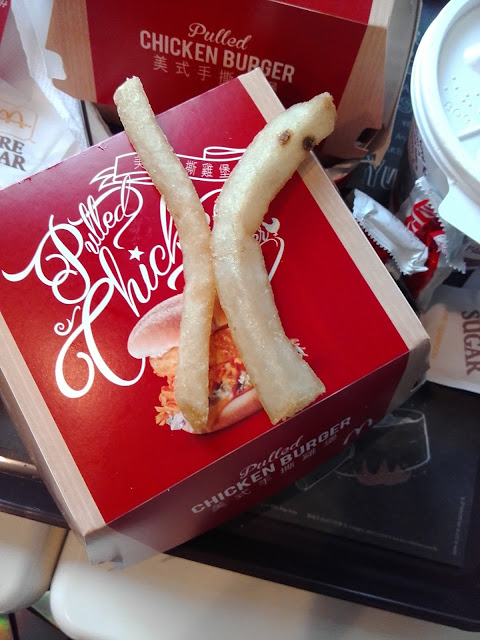 I also paid extra for the thick cut fries which were disappointing because I ate them there and the fries have only traveled a few metres from the counter and they were cold and soft like they have been in a bag and taken home.

Walked past and the bright luminescence lights got my attention.

They had food so my eyes went straight to the dessert section on the menu because the desserts were so British.

Anyway, ordered the maple glazed sour cream donut holes which were delicious as expected.
Sour cream donuts are basically donut batter mixed with sour cream and it had a pretzel like texture but slightly softer in the middle with a chewy exterior coated with sweet maple.

I will come back for the other desserts.

They have so many different types of beers and the ones in the fridge are stylish!

After chatting to a patron upstairs, I was told that BrewDog is from Scotland so when I go back to the UK, I will try the one in London and see how it compares and whether the food menu is the same.