On my last visit the noodles made of fish were sold out so tried it this time.

It was about 7pm and most of the noodles and items were nearly sold out, I got the last of the cuttlefish egg patty and the Chaozhou style noodles.

When they came they had a slightly golden surface which was good because they were not burnt.
They had a really delicate taste and it was slightly sweet. I did not use the sweet chili sauce on it because I felt that vinegar or chili oil was a better complement.
The major let down was that the pan frying oil or the pan that was used had a rancid oil taste which really ruined the cuttlefish egg because the oil taste was very prominent.
As for the texture, it was so soft and foamy but if you compare it to marshmallow it does not melt in your mouth and it is firmer. The texture is really similar to those Japanese white pillows at 三河屋 MIKAWAYA and Issei Nabe.
Cuttlefish eggs are much bigger compared to fish roe, they are liquid filled sacks, which are grounded to make these!
As this is a rare item there are no other cuttlefish eggs in Hong Kong that I can compare to, so I do not know if that was how they were meant to taste.
★☆★☆★☆★☆★☆★☆★☆★☆★☆★☆★☆★
Special sauce with chaozhou handmade noodles:

The noodles came with soup, but the soup was too salty.

The sauce on the noodles were quite nice, there was so much grounded sesame seeds in it and it was slightly sour. The noodles tasted much better this time.
★☆★☆★☆★☆★☆★☆★☆★☆★☆★☆★☆★
Stirred fried fish noodles:

I loved the generous spring onions and they were present in every spoon I took.
Although the soup was very white looking like fish soup, it tasted like pork bone soup with a sharp pepper taste.
★☆★☆★☆★☆★☆★☆★☆★☆★☆★☆★☆★
There are other branches of this in China and they are a fishball manufacturer in China.

Posted by supersupergirl at Friday, May 31, 2013 No comments:

I rarely walk on this stretch of Lockhart Road because it is in between Causeway Bay and Wan Chai but not really close to the MTR.

After trying a restaurant nearby, I decided to walk to Causeway bay and noticed this dessert shop across the road.

Luckily there was a dessert I wanted to try.

Sat myself down, and the interior was white with green tables and sofas.

The display cabinet on one of the walls was green too with lots of fruit.

My attention was immediately drawn to the Green tea sawdust pudding, so ordered that.

They also had the dessert form of flat rice noodles and rice rolls.

One of the menus on the wall was interesting too because it had Spicy crab in the middle, so I wonder if this is their dessert branch.

I was actually really surprised it tasted nice, although it was quite fattening.
The layers tasted like frozen whipped green tea cream and it was ultra light with the occasional icy particles.
It was not sweet at all which was perfect because the delicious green tea icecream on top was sweet so the two together were perfect.
Both the icecream and layers were nice because the green tea taste was not grassy and the Oreo crumbs were fine and tasted like fine cake crumbs.
★☆★☆★☆★☆★☆★☆★☆★☆★☆★☆★☆★
Posted by supersupergirl at Friday, May 31, 2013 No comments:

$9 for noodles in a doggybag

I have never tried this joint before because there are always grubby men sitting outside.

Today, the place was empty so I ordered some stir fried noodles to take out.

★☆★☆★☆★☆★☆★☆★☆★☆★☆★☆★☆★
Stir fried flat rice noodles:As they were only $9, they were probably vegetarian and do not contain beef.
I usually pick out the beef anyway.
Basically the noodles came in a bag with a short flimsy plastic fork.

Overall the taste of the noodles were bland and there were too much beanshoots.

民聲冰室 (Tai Hang)
This tiny restaurant is famous for meat patty mountains with a salted egg on top.

There was a time when the Chinese fast food chain FAIRWOOD had a similar item and for some people who have not been here before thought its was the first in Hong Kong!
http://www.openrice.com/english/restaurant/commentdetail.htm?commentid=2174106

Anyway, I came here to try the chicken after reading reviews that it was not spicy and the steamed egg with crab.

I tried this restaurant first even though my review for the Shau Kei Wan branch was published earlier.

I had the chicken twice at this place and it tasted different on the two visits.

It was basically steamed egg with a crab on top, there was lots of soy sauce on top.
The texture of the egg was really silky but it was also quite firm when you put the spoon in it.
I was surprised that beneath the steamed egg, there was more liquid which tasted nice with the rice.

The first time I tried the spicy chicken, the dish was exciting being packed with so many ingredients in it.
There was preserved eggs, peanuts, Chinese parsley, red bell peppers, and Chinese vinaigrette.
It was almost like eating a Chinese salad because the Indian lettuce and noodles beneath it were perfect and absorbed the delicious vinegar.
However it seems to vary because sometimes they use Indian lettuce and sometimes they use iceberg lettuce.
The vinegar tasted like the Japanese vinegar used for salads. 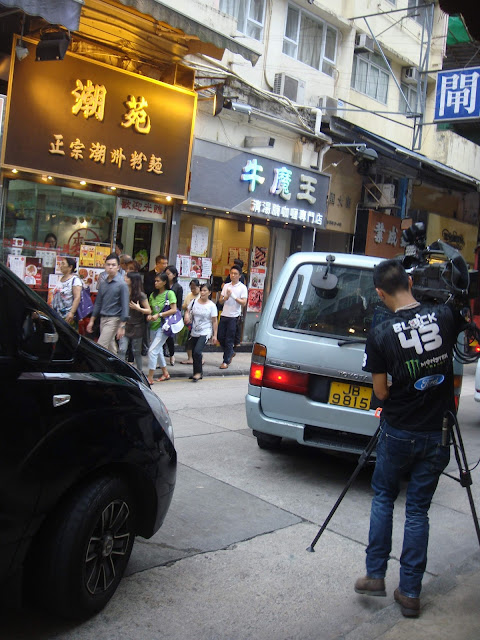 Posted by supersupergirl at Monday, May 27, 2013 No comments:

There are lots of Hokkaido Dairy Farm branches these days and the craze for it was not as big as before.

Previously I tried the branches in Admiralty and Wan Chai.

This time we tried the branch in Central located conveniently on Wellington Street after a tasting.
Thanks to Mjqueen7e who used her groupon for this transaction.

We ordered three items and they arrived quite quickly, one of the waiters also gave us advice for taking food photos too!

碰碰麵撈麵專門店 (Mong Kok)
There are not much food options for me in MK, so I usually come here, this was my third time dining here.

The menu has changed since my last visit and the choice of noodles have changed too.

My favourite ultra thin vermicelli was not there but they now have "horse mane" vermicelli so I tried that.
I tried to ask what it was and they answered it was rice vermicelli which I already know.
I just wanted a more detailed description ie whether it was thin or thick!

The daily special that day was fried salt and pepper fish joints or fish joints in salt water so I chose the salt water one.
When it came I was surprised they put glass vermicelli in it as well which was a bonus.

It was quite good because it soaked up the sweet fish broth.
The fish meat that was in between the bones were silky, soft and gelatinous.
The major problem was that the whole dish was luke warm, but luckily the fish did not have a fishy taste because when fish gets cold, the unpleasant smell comes out.
★☆★☆★☆★☆★☆★☆★☆★☆★☆★☆★☆★
Shrimp roe noodles tossed in soy sauce:

It had the same problem as the above, the noodles were cold.
So for a person who gets burnt on moderately warm items, the cold noodles would probably feel even colder for normal people.
The sauce was not as good as before because it was too sweet.
★☆★☆★☆★☆★☆★☆★☆★☆★☆★☆★☆★
Posted by supersupergirl at Monday, May 27, 2013 No comments:


When this opened I decided to go there and try it, but it was closed.

Everyday I kept passing by and it was still not open!!!

They only had the spring onion and onion flavoured chicken whereas the menu before had many other flavours.

Anyway for this set you could choose three other items to go with it and I chose guava, chicken organs and potato.

All these items were neatly stored in the fridge.

After ordering, the guy cuts the chicken with scissors into a metal bowl and the chosen items as well adding seasoning, sauces, and their signature onions,
There was a huge bowl of onions and the pieces of onions were HUGE, it was basically a whole onion sliced in half and quartered.

It was similar to Hau Hing's chicken but packed with more seasoning and additional items.
The chicken organs were not what I was expecting because they were gizzards and not liver, they were quite hard and chewy as well.
I chose guava which was also a wrong decision because the guava was not as refreshing as apple would be and the last option I chose potatoes which were not soft enough.
Even though it was not perfect, I would order it again and try other items with the chicken.
Overall the chicken was quite nice and flavorful but the onion pieces were a bit too big (slightly bigger than a Chinese spoon) and bothersome, they were raw as well.