Went here a while ago after seeing celebs posting themselves with snakes etc. 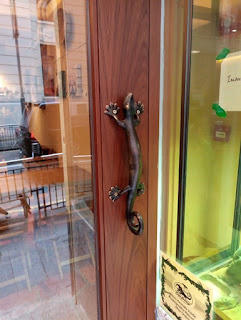 Food is rather exxy so only had a drink but I have to admit the menu is really good as the food offered is very creative and I like the way they have food for omnivores, carnivores, herbivores etc. 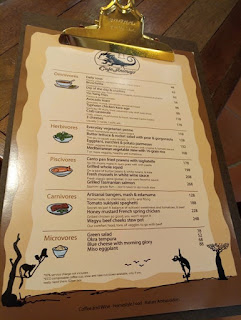 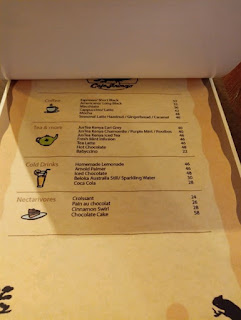 My picks are the morning glory with blue cheese which should work as the fermented tofu is replaced with blue cheese in a similar concept.
Had the seasonal ginger latte which had a good bitter aftertaste but less on of a gingery kick. 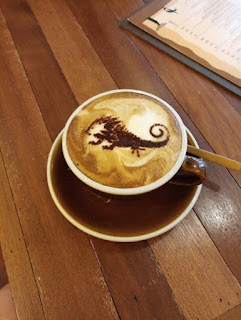 Will return if they launch some lunch menus because I doubt people will come during the day which is why it is so empty.

Posted by supersupergirl at Monday, January 28, 2019 No comments:

I love Potatoes, be it fries, chips, baked potatoes, mashed potatoes I'm in.
Potato King specializes in two types of fries: Japanese long fries and Belgian fries which are very different to each other.
When I got there, the signs were encouraging as I could smell potatoes and the the oil in the air wasn't that strong but then I specifically went early in the day so that the oil should be fresher.

There is an English menu by the side which is split into two sections. 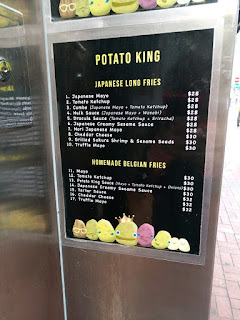 Clearly for the Belgian fries, it has to go with mayonnaise.
As well as mayo, they have bolognese and cheese but I secretly wish they had gravy for poutine or curry sauce like the English Chippies.
I was so excited about the Japanese Long fries as they only cost $28 which were $50 at the Japanese Fest at PMQ.
There are various of sauces as well but to be safe I went for the mayonnaise and seaweed.
I was tempted on the ketchup but it depends which brand they use as some brands like Delmonte are just sweet.
Potato King reminded me of La Cornet Belge in Central as they have Frikandel and chewylicious Stroopwafels.
Will try the Frikandel next time so that I can compare it to the one I tried before. 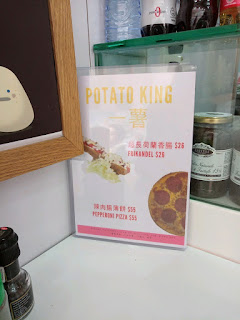 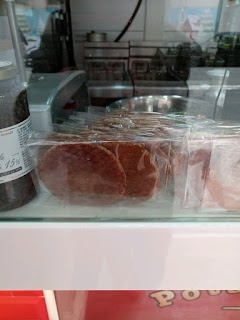 Drinks at the counter: 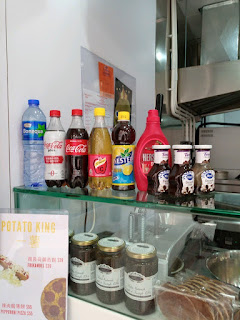 Condiments on the table: 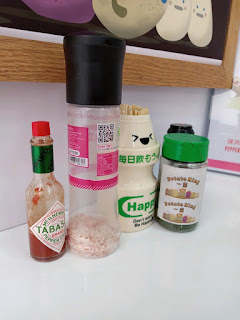 While I was waiting, you could see them cut the fries from whole peeled potatoes.
They take their frying professionally as they measure the oil using a temperature gun. 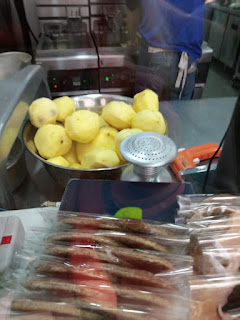 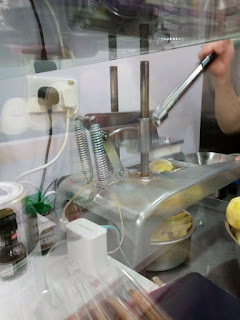 Here were my Belgian Fries which were much better than the ones at La Cornet Belge except that it wasn't served in a cone!!
The fries were how they should be crispy yet starchy in the middle, the best thing is that it comes with real mayonnaise. 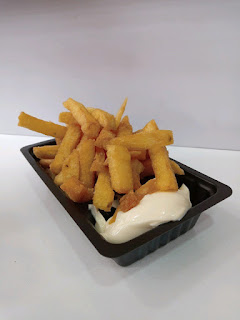 Next were the Japanese fries which are a must try as well because they are freshly extruded to order with mashed potato mixture and topped with a sauce of your choice.
As well as the Belgian fries, these satisfied my cravings too because they were fluffy in the middle with light crispy coating!! 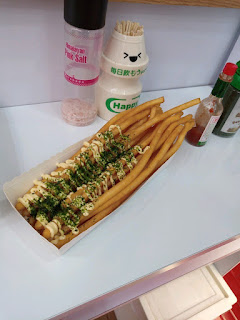 Definitely coming back because it is really impressive to come across something that is inexpensive yet the real deal in MK.
So let's hope they can keep it up!

Quarry lacks good Italian food and Ask for Alonzo just hits the spot with Southern Italian dishes in a trattoria environment.Discovered this joint after going to the Tong Chong Street market.
There is an alfresco table where you can have drinks before dinner.

The menu had a good choice of variety. 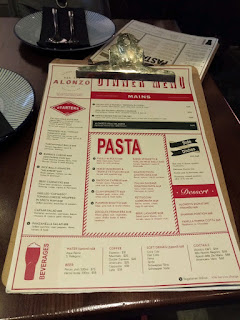 Started with the bread with was accompanied with basil puree rather than the usual olive oil and balsamic.
I loved the basil puree as it complimented the bread very well. 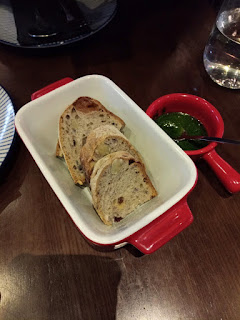 For starters, had the burrata cheese with extra parma ham for +HKD60. 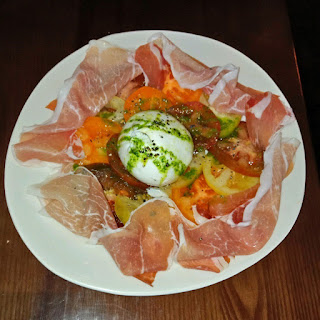 Basically all my favourites on one plate on a bed of colourful Heirloom tomatoes in all colours which were juicy and umami taste to the max along with the creamy burrata.
The extra ham gave it the salty flavours and goes very well with tomatoes and the burrata too.
Next were the meatballs which were topped with chunky grated Mozzarella cheese.
Each meatball was big and tasty loaded with herbs which accentuated the flavour as well as the chopped tomato sauce. 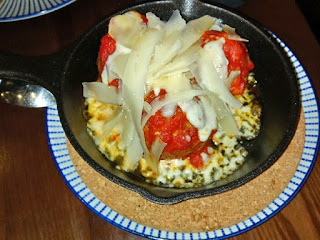 As well as the meats, the Zoodles are the best because they were juicy and crunchy without any grassy taste and the hazelnuts gave it a nutty balance to it. 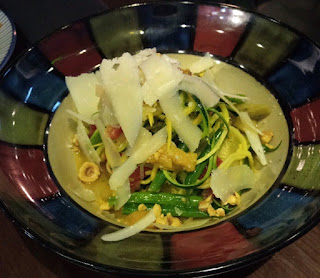 For pasta, had the mixed mushroom and truffle fettuccine served with poached egg. It was good how it was not too creamy so you could taste everything from the truffles to the delicate egg. 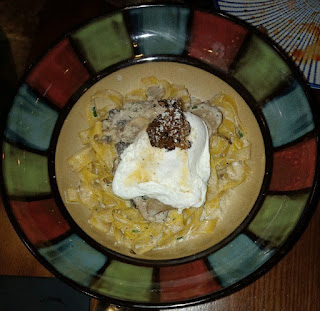 Finished with the panna cotta and tiramisu which was a perfect ending complimented with aromatic coffee. 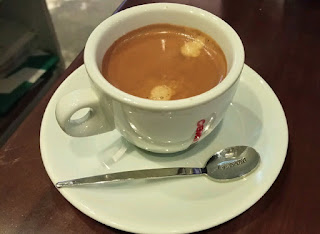 The panna cotta was creamy and sinfully delicious as it was made with double cream while the tiramisu was equally as good spiked with liquer. 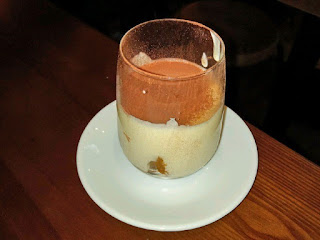 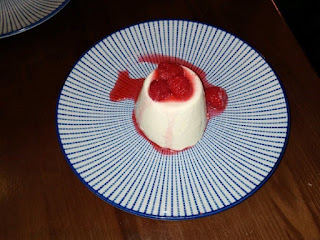 Will definitely check it out again for the other dishes.

Posted by supersupergirl at Monday, January 21, 2019 No comments:

I love Singaporean and Malaysian food so decided to make a record of all the Singmalays foods that I eat.
Some are authentic and some are just Singmalay inspired.

Posted by supersupergirl at Friday, January 11, 2019 No comments:

Went here to celebrate a friends birthday!!I didn't know it was Sichuan fare but it turned out to be great.
Be sure to get the early as they have a wardrobe where you can dress up in Chinese Dynasty clothing!

Dishes were great too especially the Kungpao prawns which were huge and crispy in a tangy sauce.

The fish topped with crispy bean bits was comforting as the fish was tasty and similar to the fish and chip quality.

Finished with the stir fried glass vermicelli which was loaded with egg.

Posted by supersupergirl at Thursday, January 03, 2019 No comments:

Ever since I went to Swedish National day, I have fallen in love with Nordic food because I can relate to it.
Discovered Rye House from another Swedish event where they were doing a collaboration with the Mäckish Girls a while ago during the weekend.
After trying that, I was determined to come back to try the food from Rye House!

There is so much on the menu and they have a salad bar as well.

The reason why I can relate to Nordic food is that they use a lot of bread and potatoes which is basically the same as the diet in UK.
Interestingly their snacks are really similar to us in terms of flavours and they also have this similar snack to Wotsits!!

This was so delicious because the pastry tasted like a thin crispy Ryvita tart filled with potatoes that were silky and viscous topped with creamy egg just like the stuff you get in egg mayo sandwiches.
It is so comforting to see lots of similar ingredients like their prawn and dill filling which tastes just like our Prawn and Mayo filling but with dill in it.
==========
Next was the Nordic Hash (Pyttipannu) , again a really simple but comforting dish that is good on a winters day.
It was diced and fried cubes of potatoes that were fluffy and soft with a perfectly browned edge complemented by fresh organic eggs and pieces of meat.
Basically a delicious dish that you can eat all day or for brunch.

I loved it because it wasn't heavy with chunks of pink salmon and lots of dill.
There was a little butter in it to give it that beautiful golden glow as well enhancing the taste.
All was good and I was shocked that even their hot chocolate was so heavenly.
Will definitely come back again.

I appreciate them using environmentally friendly straws which are actually real plant straws.
Basically using rye straws for drinking which are biodegradable!