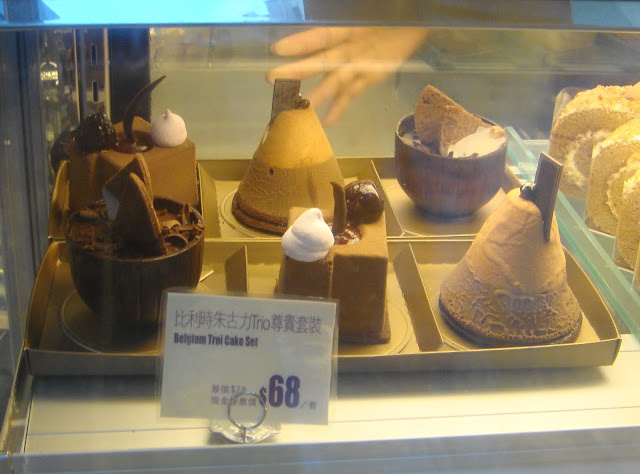 I asked what flavours they were and I think she said: Chocolate and honey, choc and banana and chocolate and orange....
Posted by supersupergirl at Friday, June 29, 2012 No comments:

When I saw reviews for this place I was really excited and wanted to go as soon as possible.

The last time I had a nice Japanese hotdog was in Sai Kung at Juicy J's and here it seems they have more flavours for Japanese Hotdogs.

Luckily it is quite close to Tin Hau MTR station, so you do not need to walk as far as Tai Hang Village where most of the eateries are.

Anyway, from the outside it looks like a giant vending machine which is obviously for decoration purposes.

The menu is nice and simple.

Compared with Juicy J's the interior was quite Japamese ,

The only let down was the dripping air conditioning.
On the photos you can see there are lots of big droplets about to fall.

Apart from the water dripping I was surprised they had separate bins for plastics, cans and paper.

I do not have a picture but their takeaway boxes for the hotdogs were nicely designed but you have to pay $2 for takeaway.
Also their napkins have their logo on it and cost $1 per pack.

They have put thought in pairing the fillings with the sausage to give you the best taste, but the ony disadvantage is that there is no flexibitliy like other hotdog places where you can choose the sausage.
It limits the choice for people who do not eat pork or beef.

All the hot dogs have matching names. The hot dogs I was interested in trying were Sabi Dog, Daikon Dog and Niko Dog.
I think the Niko Dog is quite a good option for something light because it is just crabment.
In the end I chose the Daikon dog because it was similar to the one in Sai Kung with radish but they did not let me change the beef sausage to chicken so I chose the Nori Dog instead.
Thinking back I should have ordered the Sabi Dog because cucumber, wasabi and sausage is also a good combination.
But anyway I will be back to try the rest.
As well as hot dogs they also serve other fried snacks such as scallops which I also want to try.
++++++++++++++++++++++++++++++
The items I would order:

D1 - Nori dog
The bun for the dog was quite nice and it was soft, it had black sesame stuck to the centre of it.
Beneath the generous seaweed there was plenty of mayonnaise sauce and diced onions which tasted nice however I found the sausage slighty too chewy and rubbery.
The only cutlery they had was a plastic fork which can make eating quite messy and same comment as the previous review they only had a steak knife.
++++++++++++++++++++++++++++++
Posted by supersupergirl at Wednesday, June 27, 2012 No comments:

They are tasteless at first because all of the sauce is at the bottom.
The spring onions and dried shrimps could barely be seen.

Overall it tastes ok with the sauces but the texture of the rices rolls were not soft enough.

Posted by supersupergirl at Wednesday, June 27, 2012 No comments:

Chocolate and hazelnut delight
The cake looked like an opera cake with different layers however it was really hard and the cream layers were brittle and dry.
The top layers tasted nice but the bottom most layer was dry and hard.
There was not much hazelnut taste or any hazelnuts in this cake.
Overall if the cake was much softer I would have liked it.
Posted by supersupergirl at Wednesday, June 27, 2012 No comments: