When this dish came, I saw this rainbow sheen glistening on the mushrooms!
I hope it was not artificial oil because you only find this on petrol and other synthetic oils. 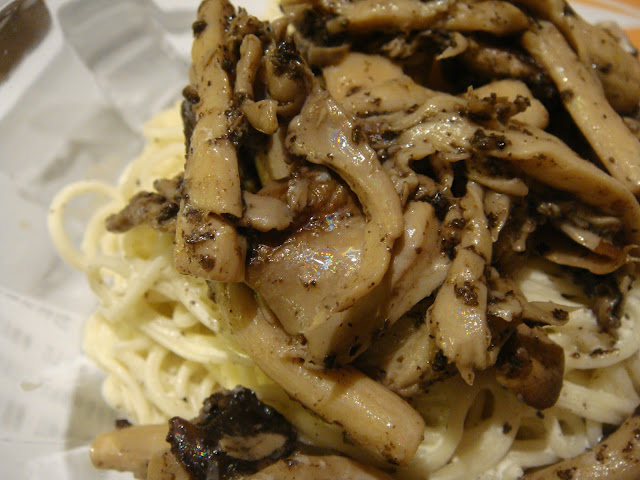 Posted by supersupergirl at Saturday, August 31, 2013 No comments:

Just got some great A4 grading Wagyu Sirloin and huge Hokkaido scallops (Sashimi grade) from Wagyu Door To Door.

It came neatly packed in a box with ice packs, cooking instructions and some scrumptious Himalayan salt. 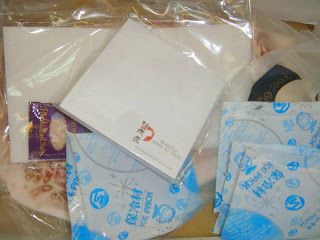 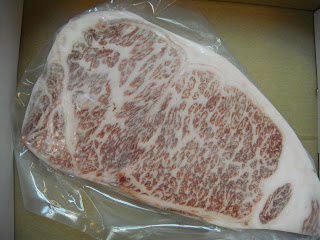 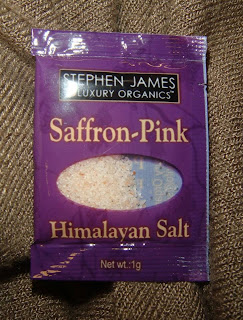 The steak was neatly packed in a vacuumed sealed pack which was clearly labelled with its weight and what type of steak it was. 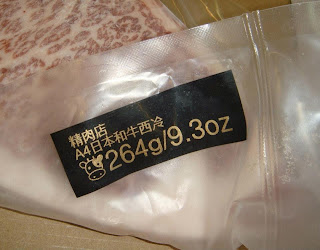 It came with clear instructions so it was simple cooking it.

After it was cooked, the steak tasted really delicious and soft because of the even fat marbling. 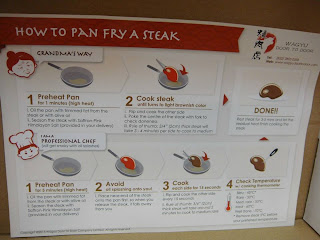 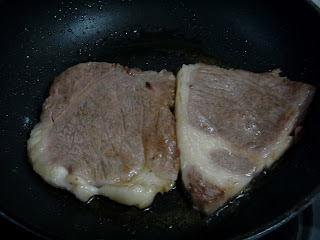 The scallops were huge. 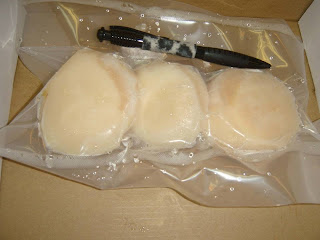 After defrosting them, I sliced them and put some Himalayan salt on it and they tasted great just like other salts that they put on scallop sashimi such as Green tea salt, curry salt etc. 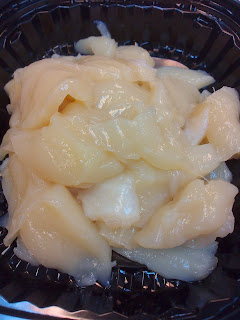 There is a good range of beef ranging from US and Japanese with A2 and A4 grading.

As well as beef they also offer lamb, tiger prawns and sauces. 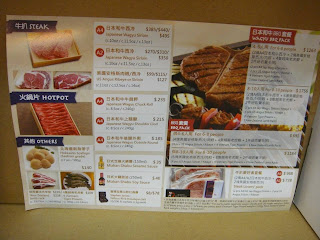 For more info:
https://www.facebook.com/WagyuDoorToDoor
Posted by supersupergirl at Saturday, August 31, 2013 No comments:

Email ThisBlogThis!Share to TwitterShare to FacebookShare to Pinterest
Labels: beef

Ramen and Tapas at KAZA

KAZA Ramen & Tapas (Wan Chai)
I don't normally walk this stretch of Wan Chai, but happened to pass by so tried this place.

The decor of this restaurant was quite bright and colourful with spoons as part of its decoration.

Before coming in, I asked what type of Ramen they served and said it was made in house.
There is a machine which makes the noodles.

The noodles portions according to weight:

The soba was too creamy and milky that it got a bit sickly and the trufle essence that they used was a bit too artificial because when it came, there was a rainbow sheen glistening on the mushrooms.
I have never seen rainbow sheens on organic oils or natural oils, it only happens in petrol.
★☆★☆★☆★☆★☆★☆★☆★☆★☆★☆★☆★
Toasted French baguette slices:

Email ThisBlogThis!Share to TwitterShare to FacebookShare to Pinterest
Labels: ramen

A Chinese version of Heston!

Shui Yue (Causeway Bay)
Being a fan of Heston's feasts and fun presentations of food I was naturally drawn to Shui Yue for its exquisite way of serving food.

As soon as I arranged the date, I was itching to go and waiting eagerly that day, and the hours went so slowly!

I have always wanted to try Bo Innovation as well but its one of these upstairs places where you need to book that deters me because I need to plan ahead.

The food at Shui Yue is Chinese style cooked in a Western way which enables you to taste the food.

For each dish, there is a health benefit for the ingredients used because Karen believes in healthy dishes.

I never really eat Chinese food because most Chinese food is just stuff thrown in the wok with salt, MSG, soy suce, sugar and stir fried in generous oil but saying that there are a few decent ones around.

Here was what we tried which costs $420 per person and no service charge is included.

Competitors are probably suspicious because they probably want to know how good their food is and fear it may bring down the market value for molecular gastronomy cuisine.

Anyway, the location is great and not located in an industrial area.
It is on the quiet side of Causeway bay and you could probably get away with parking your car there hence a really good place for celebrities to dine!
★☆★☆★☆★☆★☆★☆★☆★☆★☆★☆★☆★
Tomato jelly ball paired with oyster leaf, preserved plum tomato basil

For the starters, we were advised to start from the left, right, then centre.
The first item was the huge molecular tomato caviar filled with tomato essense.
It bursted with delicious tomato essence which was made from 7-8 tomatos for a molecular caviar of this size.
Next was the oyster leaf which was served on an oyster shell covered with lava salt foam.
After devouring the oyster leaf I was really shocked by the taste because it was fascinating that you could get a plant tasting exactly like an oyster.
The lava salt foam on top made it taste like a freshly shucked oyster.
Lastly there was the Cherry tomato which was in a vacuumed environment forcing the preserved plum flavouring into it.
It had a really strong preserved plum flavour in the form a cherry tomato.
The deep fried Chinese parsley beneath the tomato ended the appetizer nicely because the grassiness of it balanced out the strong plum flavour.
★☆★☆★☆★☆★☆★☆★☆★☆★☆★☆★☆★
Surf clam herbs salad:

Next was this dainty salad, it was surf clams on fresh mountain yam slices garnished with herbs from Holland and caviar topped with edible gold foil.
The surf clams had a nice lemon and ginger taste and the mountain yams were crisp and juicy like crystal pears with a slightly viscious texture.
★☆★☆★☆★☆★☆★☆★☆★☆★☆★☆★☆★
Dragon pearls:

These were huge crabmeat and squid patties filled with longnan berries with crab roe inside.
They tasted great with or without their homemade mayonnaise which had a nice hint of dill in the flavouring.
I wished I saved some crispy vermicelli to put in the fish soup.
★☆★☆★☆★☆★☆★☆★☆★☆★☆★☆★☆★
Black tiger paw mushroom soup:

This soup is made with Chinese black tiger paw mushroom originating from the Yunnan provence.
They are currently in Season.
You can get them fresh or dried. For the fresh ones there is a fragrant smell and aftertaste, but the dried ones there is only a strong smell but no aftertaste.
There are two colours yellow or black, black is prized and has more health benefits.
It was really creative how they used the Chinese mushrooms to make a soup using the Western method.
When the soup came, there was a really nice earthy mushroom smell, the taste of the soup was similar to cream of porcini soup but it had a stronger and bitter tone to it.
On the side of the bowl, it was garnished with powdered mushroom to give it an even more complete mushroom taste.
★☆★☆★☆★☆★☆★☆★☆★☆★☆★☆★☆★
Grilled lamb chops

These were Welsh lamb chops which were extremely tender and supple.
They were marinated in sichuan spices which satisfied my craving for Sichuan pepper because the spices were very light yet enough to recognize the Sichuan taste.
The grilled onion was crisp and sweet.
★☆★☆★☆★☆★☆★☆★☆★☆★☆★☆★☆★
Fish soup with crispy rice:

The soup was made with Pacific saury fish which was boiled for five hours.
It had a lovely milky taste with a hint of ginger.
After adding the deep fried rice grains, the rice was lovely and crispy after it had soaked the soup.
It was really good that this was part of the meal because it was quite substantial without being too heavy and it fulfulls the rice craving.
I think the crispy vermicelli from the earlier dish would taste great in the soup too.
★☆★☆★☆★☆★☆★☆★☆★☆★☆★☆★☆★
Sweet mango lights on Chocolate soil:

The beautiful pearl is served on a bed of bulbs because they got this inspiration from a lightbulb.
I felt that it would also look like on a bed of sand and seashells or some smaller pearl necklaces and bling bling crystals too.
Anyway it was too pretty to eat but I had to eat it, so I cracked the sugar shell which was made in the same way glass ornaments are blown.
Inside the pearl, there was gorgeous lightly whipped fresh mango which had a delicious tart taste that complemented the chocolate soil.
★☆★☆★☆★☆★☆★☆★☆★☆★☆★☆★☆★
Japanese green tea icecream red bean puree:

Maxim's Cake Shop (Central)
Was given this chocolate cake because someone was celebrating something.

The cake was rich and sweet.

Dabyida Restaurant and Bar (Tsim Sha Tsui)
I don't often hang around on the Kowloon side, especially TST because everything is spread out so I have been delaying my visit to Dabyida.
Before I came, I made a reservation and some enquiries because I was deciding on coming for lunch or dinner.
The lunch sets did not seem that interesting so I opted for the A la Carte menu in the evening.
The staff on the phone were surprisingly polite and patient on both calls.
When I got to Minden Avenue, Dabyida could be seen right across the road.

Inside it was quite nice and classy.

It was nice having sauteed escargots because escargots are normally baked in boring garlic butter, but here the escargots were nice and soft.
There was delicious baby spinach in it as well which was cooked just right and it had a lovely emerald green colour complemented by finely chopped chives.
The sauce was tomato sauce and it tasted like cream of tomato soup so it would be great if the tomato sauce could be more tangy.
★☆★☆★☆★☆★☆★☆★☆★☆★☆★☆★☆★
Dabyida Mocktail $65

This was made with fresh grapefruit juice, passion fruit juice, apple juice, lemon juice and syrup.
They can adjust it according to your taste depending on what fruits you like.
The one I had was really nice because they happened to put more grapefruit in it and there were lots of grapefruit pieces in the drink.
I also requested less syrup so it was just how I liked it.
★☆★☆★☆★☆★☆★☆★☆★☆★☆★☆★☆★
Posted by supersupergirl at Saturday, August 31, 2013 No comments:

Delicious! Cheap Chiu chow food! EAT AT YOUR OWN RISK!

鴻記潮州滷鵝快餐 (Wan Chai)
This WAS my favourite eatery because it was cheap and delicious and offers a wide range for chiu chow food.

It was a pity on a recent visit I found a dead intact woodlouse in the food.
Before I black listed it, my favourite was the goose liver and goose blood jelly!

They both tasted strong and the goose liver was moist.

It is hard rating this place because the food is good so I would give it a smile, but since I found a woodlouse
Anyway I hope it was a one-off and should I bother telling them I found a woodlouse in the food?
Posted by supersupergirl at Friday, August 30, 2013 No comments:

Basmati (Sheung Wan)
I love restaurants by the MTR exits and this one is really close to Sheung Wan's Exit C.

The reviews showed some really delicious looking Aloo Chops so I was really looking forward to that.

When I got there, the interior reminded me of UK style restaurants with an open bar at the far end with wines and glasses.

These were my favourite, I should have ordered two portions.
They are a bit like a silky flat potato croquettes with Indian herbs and green peppers in it.
They were not spicy so they are suitable for people who cannot eat spicy items.
★☆★☆★☆★☆★☆★☆★☆★☆★☆★☆★☆★
Basmati chicken tikka:

The pieces of chicken were served in a hot sizzling metal plate on top of julienne onions and cabbage which kept the chicken hot without burning it.
There was a piece of lemon which the waitress squeezed lemon juice onto the sizzling chicken with the handy metal pincers.
The chicken was boneless, juicy and tender which is really worth trying.
★☆★☆★☆★☆★☆★☆★☆★☆★☆★☆★☆★
Lamb masala:

I was really glad Ras malai was the dessert of the day because I thought that it was the best dessert in the menu range.
Usually I do not like Indian dessert because they taste too sweet and the Jasmine scent is too strong for my liking.
Ras malai is basically sugary white cream coloured balls which can be paneer or dough depending on the restaurant.
Here it tasted like cake soaked in cream flavoured with cardamon and topped with nuts.
I loved the sweet cream and the nuts and it was soothing after a spicy meal.
★☆★☆★☆★☆★☆★☆★☆★☆★☆★☆★☆★
Posted by supersupergirl at Friday, August 30, 2013 No comments: