Beautifood for a beautiful and beautilicious life

When I walked past this place, the bright pink immediately stood out.

It reminded me of Bentopia especially the clear bag that holds the clear tubs of salads.

The napkins were really SASSY too, as if was written by lipstick saying "CALL ME" and I love the lipstick mark too!!!

I have always wanted to try Alvin Leung's creations at Bo Innovation but I never quite made it, anyway this place is at street level and easily accessible.

They specialise in healthly food with a mix of Japanese, Chinese and Western cuisine and there is a hint of gastronomy in there as well.

They serve salads, sushi burritos or you can get the combo which is a full salad and a half portion of sushi burrito.

There are four salads each with its own attractiveness, however there were two that won me, the Salty Lemon with seared salmon and the Unami Nicoise.

The first salad which was the Demon black caesar had a slight gastronomic touch because it had bacon flavoured chicken and black garlic dressing hence the name black caesar. I wanted to try this one but I have already eaten black garlic before.

The second salad was the Iconic true 8, which has a meaning behind the name, iconic because they used an iconic vinegar from HK called PAT CHUN which has the letter eight, hence the 8 in the Iconic 8!

The third salad is the Go Green which is plain vegetarian.

The fourth salad is the Unami Nicoise which got my attention because of the word Unami and the unami vinaigrette. I really wanted to try this because in UK there is a sauce called Unami No 5 so I wanted to see if the taste would be similar to that. This salad also had "Har -Mi" powder (grounded dried shrimps I think) which was another factor I had to get this salad.

The fifth salad which was Salty Lemon and seared salmon I had to get as well because I am a lemon freek and in the salad there are crispy pieces of seaweed which I like too!

If you don't like salads they have SUSHI BURRITO as well which is more filling, it is sushi wrapped in burrito. There is a BLT sushi burrito which is bacon, lettuce and tomato with rice in a burrito wrap or the Hot sichuan chick which is obviously spicy and the 3B Beef and black bean too with shichimi dust!!

For the sushi burrito I chose the Cantonese steamed fish and the Vegetarian taco trio.

When the salads were ready, I was so eager to collect it and it felt really cool carrying it about because the bag and packaging was really nice. 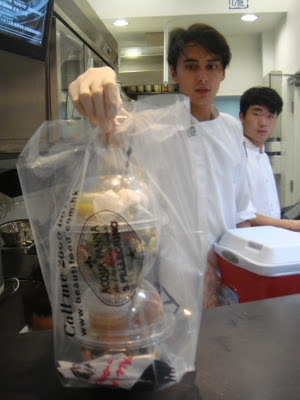 I feel really guilty my photos are not as good as my usual food photos but this time I just couldnt wait to dig in the salad that I rushed those photos.

I really loved this salad and there was generous dressing to cover every leaf in the salad.
The dressing was really refreshing that you felt hungrier after finishing it!
The crispy pieces of seaweed in the salad had this savoury taste which also made it moreish.
As for the seared salmon it was delicious and tender.

This was really fun biting into all these yummy fillings especially the porcini mushrooms with onion cream which had a delicious crisp crunch to it.
★☆★☆★☆★☆★☆★☆★☆★☆★☆★☆★☆★
Cantonese steamed fish:

This was steamed sea bream, green onion lime sauce, grated ginger, carrots, cucumber, homemade soya sauce with DC's healthy rice mix in a seaweed wrap.
The fish was so silky and the green onion lime sauce looked so gastronomique.
The only thing I was not expecting was chili because it didnt say there was chili on the order form and it was no ordinary chili either, it was extremely hot chili!!
The green lime sauce had so many tastes to it that you cant get enough of it.
Apart from the chili, it was so delicious, there was mentaiko on top of the rice roll.
★☆★☆★☆★☆★☆★☆★☆★☆★☆★☆★☆★

After finishing the salad I knew I was still going to be hungry, but on the napkin it had a quote "eat 80% full and you will have a happier and healthier life" which is agreeable but since it was so delicious it was a bit hard to agree because I WANT MORE BEAUTIFOOD!!!

Went past and saw these green grilled cakes for $2.5 each and didnt know what they were so stopped by and took a look.

Basically they were similar to filled mochi but grilled like those chiu jau style tea cakes.

I was quite impressed they were not that greasy and they were still luke warm so I ate them imediately before they got cold.

The grilled mochi was still warm and the custard filling inside was really nice. There was a strong custard taste and it was not too sweet.

The mochi pastry was really nice and chewy and not not too burnt, the grilled parts were slightly crispy. The thickness of the pastry was just right to balance out the filling and you could taste the green tea in the chewy pastry as well.
★☆★☆★☆★☆★☆★☆★☆★☆★☆★☆★☆★
Posted by supersupergirl at Thursday, October 18, 2012 No comments:

Apart from desserts with the delicacy Birds Nest, this place also sells jars of Birds Nest.

I ordered the clear jelly with melon and birds nest, however she said there was no melon so I had to choose another fruit/item.

The other choices were watermelon, lychee, rambutan, papaya, purple rice, and mango.

As I didnt like the other choices I chose Rambutan.

When it came, the birds nest was golden and glistening, there was coconut milk poured on the jelly and rambutan.
Comparing it to other reviews, the birds nest seem to have been served separately before but when I went it was put on the top.
Overall, I liked the jelly with the coconut milk and the birds nest, but I did not like the rambutan because it came from the canned and it was really sweet.
It was good that they did not use grass jelly because it would not look as good visually as the clear jelly and the taste of the grass jelly is much stronger.
★☆★☆★☆★☆★☆★☆★☆★☆★☆★☆★☆★
Posted by supersupergirl at Thursday, October 18, 2012 No comments:

It is quite interesting for a well established fast food chain to change their fries, I wonder if it is a global change as well.

Anyway I decided to try them.

As they were thicker, not much salt remained on the surface of the fries so they were not that salty and I felt that more ketchup was needed to makeup for the taste.
The fries before were tastier but these are also good too because they have a lovely soft center.

Posted by supersupergirl at Thursday, October 18, 2012 No comments: