On this road, there are so many choices for Indian food but with a fusion twist to cater for locals who don’t eat Indian food. 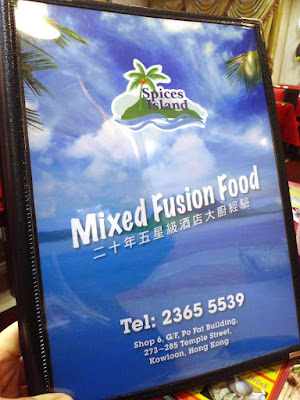 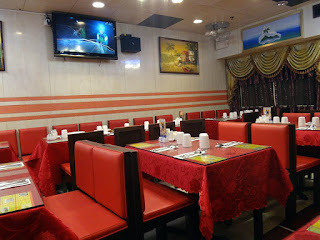 Went here because no one was dining there and the fact that Nepalese momos were on the menu and I LOVE INDIAN FOOD.

The best thing about this place is that there is no 10% service charge.

Here was what I had: 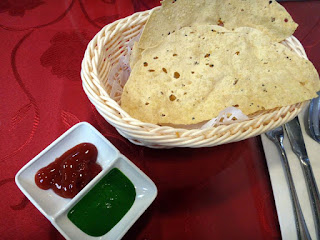 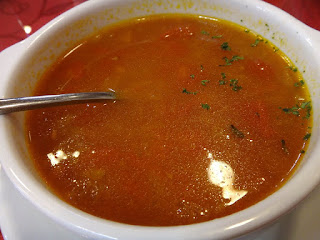 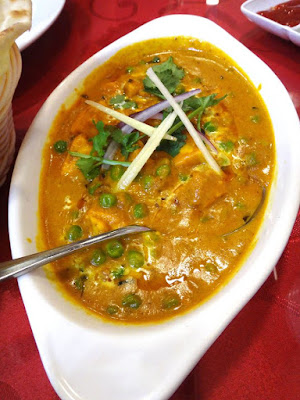 This was the best mutter paneer I have had because the spiciness was just right and there were lots of peas in it and the paneer was nice and soft without that rubbery texture.
++++++++++++
Saffron rice: 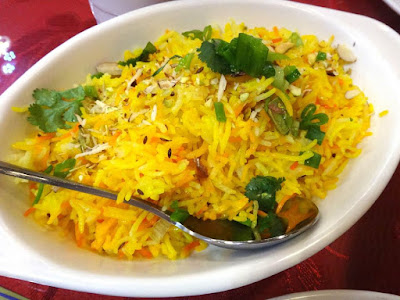 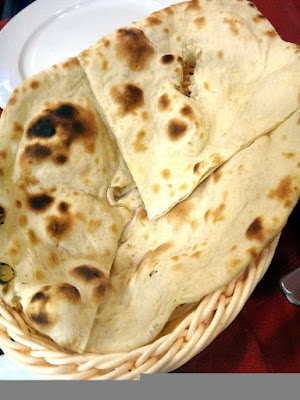 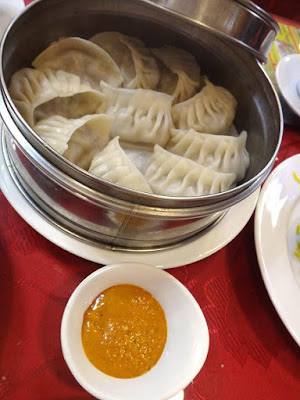 As well as curries, Nepalese momos are delicious. I got hooked on them when I tried them at Nepalese joints on the HK side. 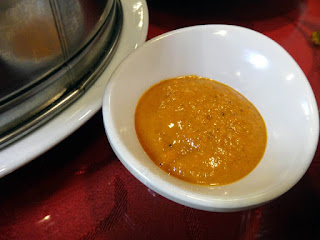 The sauce is the most important because it really makes it delicious since it has a short fiery kick as well as a really flavourful taste.
++++++++++++
Indian Tea: 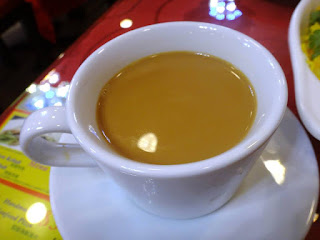 As CNY is fast approaching, everyone is getting together for dinners before CNY.
We had a bloggers gathering at Golden Bauhinia with the people from HKCEC.

It was a fun rainy night and here were the dishes we had:

Started with a plate of appetizers of jellyfish in three ways, crispy roast suckling pig stuffed with prawn paste, fried fish and a plate of bittermelon in plum sauce arranged like flowers. 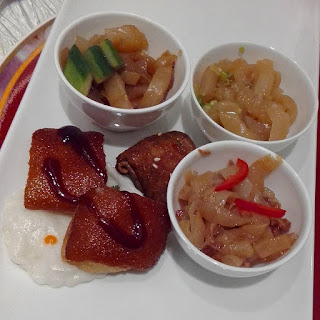 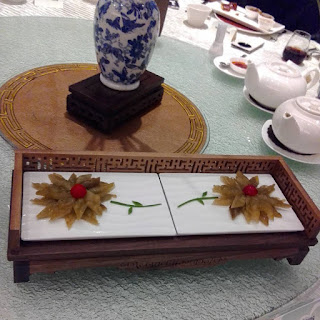 I love jellyfish so I was really happy it was done in three ways because there was quite a lot of it.
One was spicy, one had a refreshing vinegar dressing and the other was mixed in spring onion oil.
My favourite was the vinegar and spicy one.
The roast suckling pig was crispy with a layer of prawn paste on it that made it tasty.
The fried fish was also fantastic because it was boneless and crispy.

Next we had the morel mushroom, abalone and whelk soup which was a rich dark brown colour.
There were lots of morel mushrooms in it. 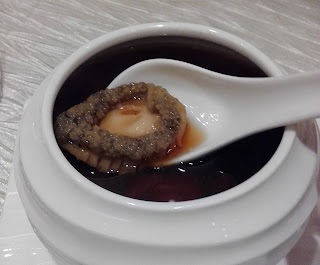 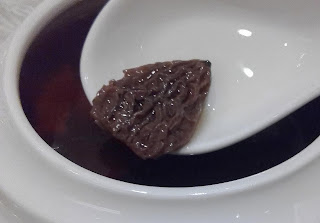 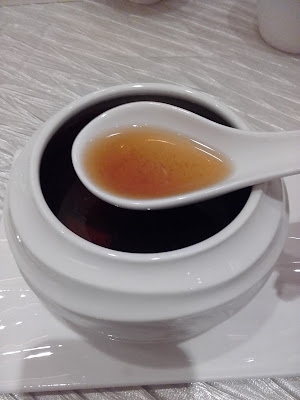 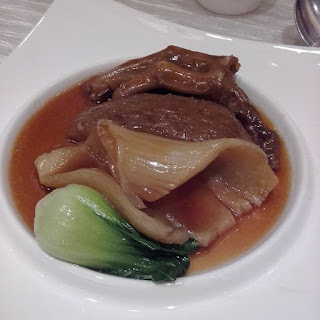 We then had steamed fish that was steamed perfectly and the fish was delicate and flaky. 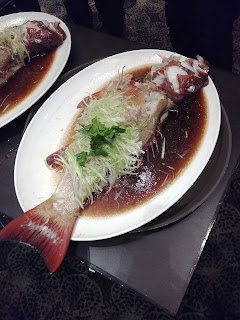 The chicken with crispy skin was served but I was quite full at that point but still ate it and the lovely crispy lotus roots.. 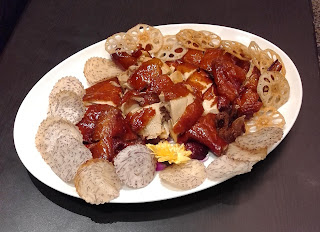 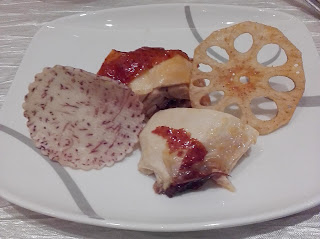 For vegetables we had my favourite crisp pea sprouts in a light soup with wolfberries and razor clams.
The razor clams were the best I have tried because the texture was soft and it sweet. 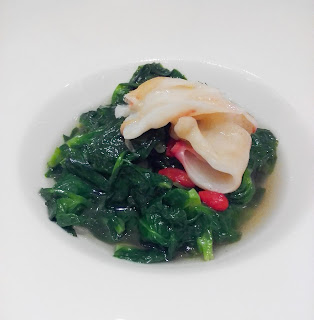 To finish off the meal we had glutinous rice with fragrant preserved sausages, which was warming and filling. 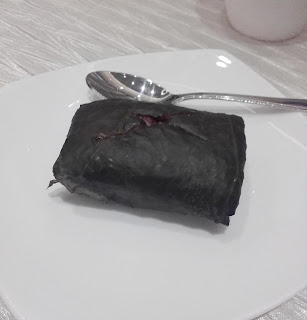 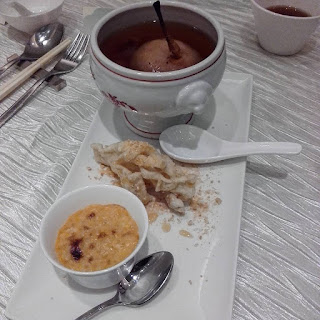 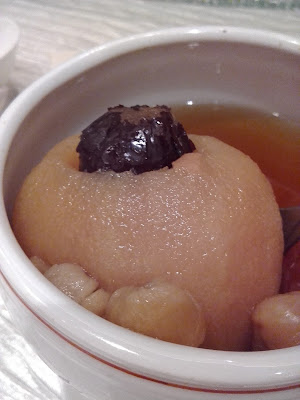 When we left, we were given a beautiful box of CNY puddings with Turnip cake with Parma Ham and dried shrimps and sweet red dates and osmanthus pudding. 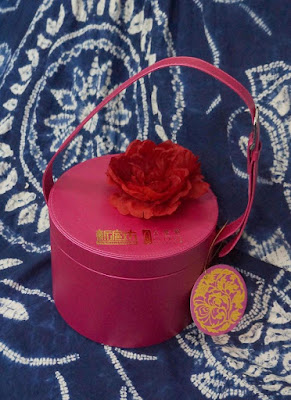 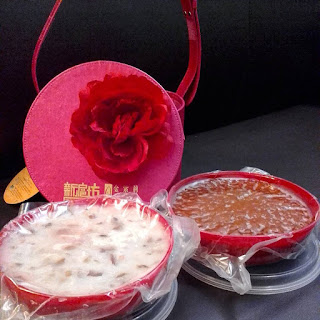 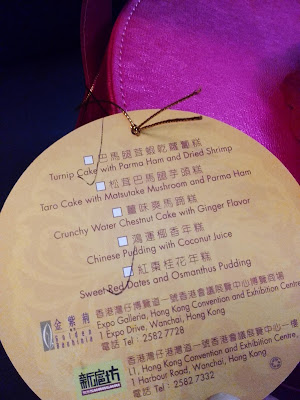 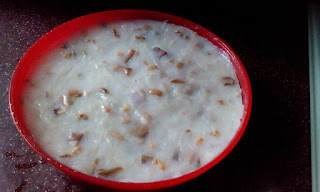 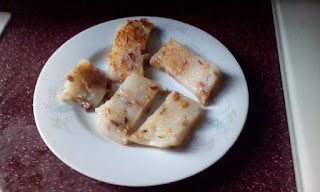 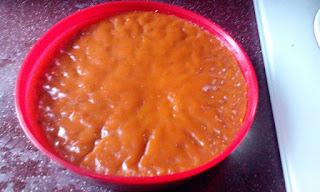 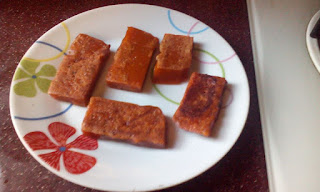 
Posted by supersupergirl at Friday, January 29, 2016 No comments:

When I first heard of this restaurant, I really fell for it because the pronunciation is the same as the Government house 禮賓府 so I was a bit surprised that the public could go in for food.
Anyway, it turns out the name of the restaurant is 禮賓傅 which is still pronounced the same but the last word means Master.

Lai Bun Fu is themed with elements from colonial days with Chinese antiques and British bits and pieces.

Went here for a pre-Chinese New Year gathering so we had some warming snake potage as well as festive dishes.

This was good because they have used the bacon and oyster concept where they have replaced bacon with Jinhua ham, which gives the oyster a nice saltiness without the smokiness.
It was an oyster rolled in ham then dipped in batter and fried.
+++++++++++++++
Traditional Snake Potage:

This was a great warming soup on a cold day with crispy red beancurd flakes and traditional petals to garnish the potage.
I liked the potage on its own without the petals and there was a nice strong fruit peel taste.
+++++++++++++++
Lai Bun Fu’s Classic Big Bowl Feast:

The big bowl feast had all my favourite ingredients because it does not contain any fatty pork belly or pork skin which are substituted with prized sea cucumber and fish maw.
The remaining sauce in big bowl feast was fit for a hotpot so we ordered extra vegetables to put in.
+++++++++++++++
Stewed Mutton and Beancurds:

The mutton was soft and delicate paired with my favourite fermented beancurd sauce.
+++++++++++++++
Braised Beef Brisket with Assorted Peaches:

As this is the year of the Monkey, there is a myth that cheeky monkeys will always steal peaches hence there are peaches in this dish to make it festive.
The chunks of beef brisket were soft and big and the peaches made it appetizing.
Personally I liked the apricots in this dish.
+++++++++++++++
Lai Bun Fu Fortune Bag:

When this was served, it was a huge tofu skin bag/sack with smaller tofu bags surrounding it.
Inside this huge tofu bag was a whole chicken stuffed with glutinous rice, but my favourite item was the smaller bags which are vegetarian filled with crunchy vegetables.
+++++++++++++++
Steamed Eel with Soya Sauce:

This was steamed fresh eel with black bean sauce.
It tastes nice but I eel bones and I just don't get along.
+++++++++++++++
Stir-fried Lotus Roots with Young Ginger, Chestnuts, and Goji Berries:

This was a vegetable dish to balance the meal, there was a nice crunch and gingery taste.
+++++++++++++++
Golden Sea Uni Fried Rice with Clams:

A fried rice that is memorable because it has springy clams complimented by creamy uni.
+++++++++++++++
Double-boiled Snow Fungus and Lotus Seed:

To finish off, had this nutritious sweet soup that contained snow lotus seed that has a sticky viscous mouthfeel.
+++++++++++++++
◎ⓢⓤⓟⓔⓡⓢⓤⓟⓔⓡⓖⓘⓡⓛ◎
Lai Bun Fu 禮賓傅
5/F, 18 On Lan Street, Central
Posted by supersupergirl at Thursday, January 28, 2016 No comments:

Fit for a modern Chinese Cinderella

I love Tang’s Cuisine because the food is delicious and it would be fit for a Chinese Cinderella to dine here with huge golden birdcages in the restaurant.

There is a nice modern twist to the food as well which makes it glamorous.
Every course was memorable but the starter and ending was fantastic because of the Western elements and it was my first time trying Nostoc.
We started off with a platter that had red wine cherry goose liver, Crystalline ice plant salad and Slow cooked salmon.

The Crystalline leaves are always a favourite of mine because I love that texture with all these studded droplets of fluid on the leaf that burst when you eat it.

The salmon was smooth and delicate.

The pigeons served here are only 20 days old which give it a delicate and tender texture.
During dinner, they will give out half a pigeon to each diner.
The pigeons are currently on promotion at $38 each.
+++++++
Chinese soup:

The abalone preparation was quite entertaining to watch because rose wine was poured on to the pebbles and set alight, and then wolf berry and chrysanthemum tea was poured over it and the lid put on to let it steam like a sauna resulting in abalone with a floral fragrant complimented by fine salt.

Basically this was fish done in three ways: fried, in light gravy and minced.
A fish lovers delight.

+++++++
For vegetables we had this hollowed out wintermelon filled with prized Chinese fungas and crispy Chinese ham surrounded by pea sprout leaves.

+++++++
The following dimsum are auspicious dishes for the New year with with a creative prawn dumpling which looks like a mandarin because the dumpling pastry is made with yuzu which makes it appetizing.

The Roast goose puff was elegant filled with shredded duck in rich gravy.

As you can see I was obsessed with the nostoc because it was the first time I saw it.
They are seaweed pearls which are pretty in different shades of green/brown.

There was so much nostoc in it.
The Nostoc was like these big crisp tapioca seeds swimming in sweet young coconut soup.

It was really nice how they ended the meal with two different fresh vegetable juices which help to digest and detox.
+++++++
Tang's Cuisine 唐宮壹號
8/F, Hopewell Centre, 183 Queen's Road East, Wan Chai.
Posted by supersupergirl at Wednesday, January 27, 2016 No comments: