Char kway teow is flat rice noodles stir-fried over very high heat with light and dark soy sauce, chilli, a small quantity of belachan, whole prawns, deshelled cockles, bean sprouts and chopped Chinese chives. The dish may commonly be stir-fried with egg, slices of Chinese sausage and fishcake, and less commonly with other ingredients. Char kway teow is traditionally stir-fried in pork fat, with crisp croutons of pork lard, and commonly served on a piece of banana leaf on a plate.

The char kway teow in Kampar, Perak, Malaysia, is served with cockles but with no prawns (although prawns may be available on request). According to old Kampar char kway teow sellers, this is because Kampar was not near any source of fresh prawns. Kampar char kway teow is also slightly sour.
There are also "gourmet" versions of char kway teow, commonly found in Ipoh and Penang, where the dish may be prepared with more seafood, with crab meat[1] and with duck eggs.
(source: wiki)

The one I tried at this shop had most of the traditional elements such as chinese chives, stir fried eggs and fishcake.
I really liked the freshly chopped spring onions on top of the noodles because it gave it a really nice taste.
It had a really nice thick sauce without that oilyness taste of the pan. 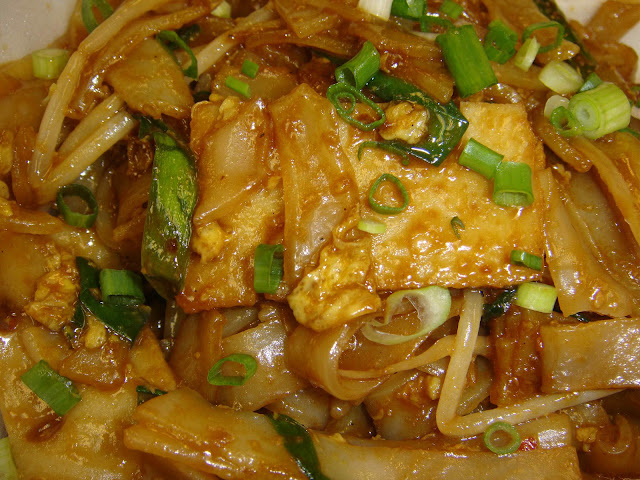