[稻香 Tao Heung] Ruined by the oil and pork

Went here because the locals wanted Chinese food.
Ordered the lobster and e-fu noodles which looked good when it came and the lobster actually had lobster meat unlike some places you get dehydrated lobsters.
Unfortunately, the oil was old hence it killed the lobster, the taste of the oil was stronger than the fresh lobster taste. 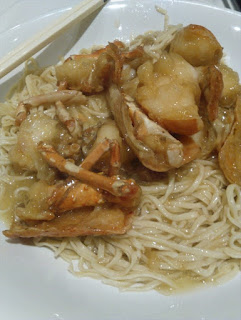 The other dish we had was the spinach with salted egg and century egg which doesn’t normally contain pork but here they decided to throw it in as a bonus but the pork wasn’t fresh so it ruined this delicious dish with a bad pork flavour. 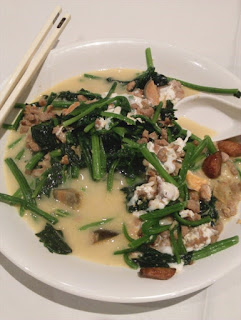 The spare ribs were just bones and fat and the other vegetable dish was ok but it was weird that it was garnished with mushroom slices.
The waiters were quite nice but also annoying at the same time because they have a quota to meet hence they keep pestering you to order more stuff like rice and desserts.
Posted by supersupergirl at Sunday, November 08, 2015

Email ThisBlogThis!Share to TwitterShare to FacebookShare to Pinterest
Labels: Chinese