This is not authentic Char kway teow but I liked it anyway, it was from Hong Kong so it was probably localised to suit local tastes.

Each strand of noodles was covered in thick sauce and there was lots of morning glory, spring onions.

The authentic ones have cockles and clams which I would have loved.


Char kway teow, literally "stir-fried ricecake strips", is a popular noodle dish in Malaysia, Indonesia, Brunei and Singapore. The dish was (and still is in some places in Malaysia and Singapore) typically prepared at hawker stalls.

It is made from flat rice noodles (河粉 hé fěn in Chinese) of approximately 1 cm or (in the north of Malaysia) about 0.5 cm in width, stir-fried over very high heat with light and dark soy sauce, chilli, a small quantity of belachan, whole prawns, deshelled cockles, bean sprouts and chopped Chinese chives. The dish is commonly stir-fried with egg, slices of Chinese sausage and fishcake, and less commonly with other ingredients. Char kway teow is traditionally stir-fried in pork fat, with crisp croutons of pork lard, and commonly served on a piece of banana leaf on a plate.

Char kway teow has a reputation of being unhealthy due to its high saturated fat content. However, when the dish was first invented, it was mainly served to labourers. The high fat content and low cost of the dish made it attractive to these people as it was a cheap source of energy and nutrients. When the dish was first served, it was often sold by fishermen, farmers and cockle-gatherers who doubled as char kway teow hawkers in the evening to supplement their income. 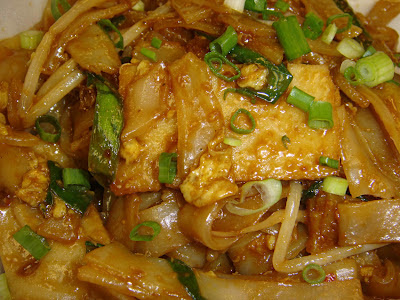 Email ThisBlogThis!Share to TwitterShare to FacebookShare to Pinterest
Labels: Malaysian