Triple sunny side up eggs brighten ur day @ Ma Sa 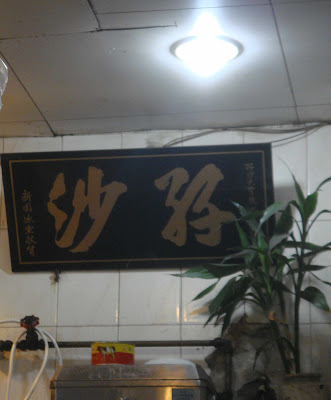 I came here especially for the triple fried eggs with Chinese barbecue pork with rice.
I can never get enough of runny egg yolks especially with plain boiled rice that is perfectly cooked and soy sauce that is not too sweet or too salty.

Anyway I ordered that and did not know you could have the eggs cooked in other ways because they asked how I wanted my eggs so I just said I wanted the yolk to be runny.

When it came it was three eggs co-joined together with three BIG runny yolks!!

The gourmet barbecue pork was beneath the eggs and there was generous dark soy sauce all over the eggs and rice.

Usually I do not like barbecue pork unless it is lean and soft but from the previous photos on Openrice the barbecue pork looked great.
The pork was sliced thinly as well and there was a fair amount of pork to go with the rice after discarding some fatty bits. It was soft and tender.
The eggs were done nicely and the yolks were big and runny and because there was three egg yolks I did not have to eat the yolk sparingly with the rice.
As well as that it was impressive the eggs did not have an oil smell or have an oil taste. Eggs are really delicate ingredients that absorb any foul flavouring or odours easily.

I felt that this dish was a perfect ratio of rice to pork and eggs and soy sauce, there was not one mouthful that was boring.
All in all, each of those four elements was perfect which made it extremely delicious.
It was like the excitement of having English Breakfast, dipping sausages and other elements into the egg yolk.

Every mouthful was delicious, it was either lovely rice with runny egg yolk, rice with soy sauce, rice with barbecue pork and egg yolk.
There was sufficient amounts of roast pork, rice, and egg to finish most of the dish but in the end I finished with only two spoons of rice left and I wished there was some more soy sauce to finish it off.

The soy sauce they had was extremely nice. There are several places I have been where the soy sauce made the food fantastic.
But the soy sauces are unique in different ways.
The soy sauce here is dark and thick and it is slightly sweet.

Also tried the curry but found it too spicy.

The prices here seem quite reasonable which are less than $30 per dish.

They also have a daily set special which is barely legible unless you are a local Chinese who can probably make out what it saids.

What on earth does that say