I wasn't sure what to expect coming here because the name Fisher & Farmer sounded interesting and when I got there I was surprised.
As an expat, my perception was these archaeological artefacts and these characters which looked like they were from sci fi movies and Aztec symbols yet it had a Chinese element to it. 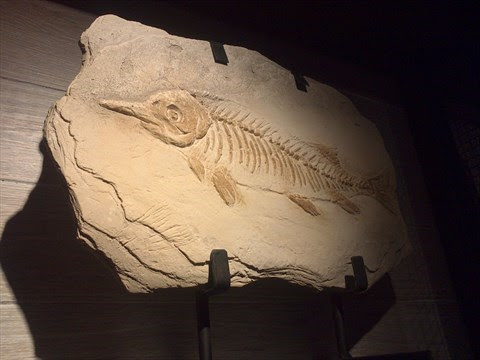 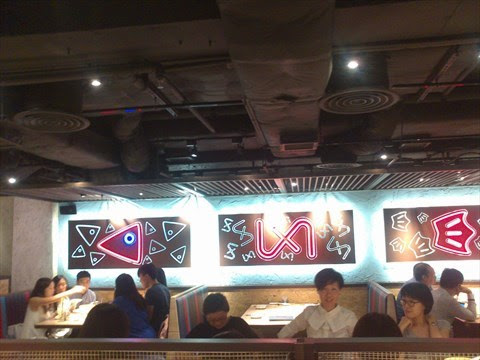 At the entrance, it looked like a Western kitchen with Chinese roasting going on. 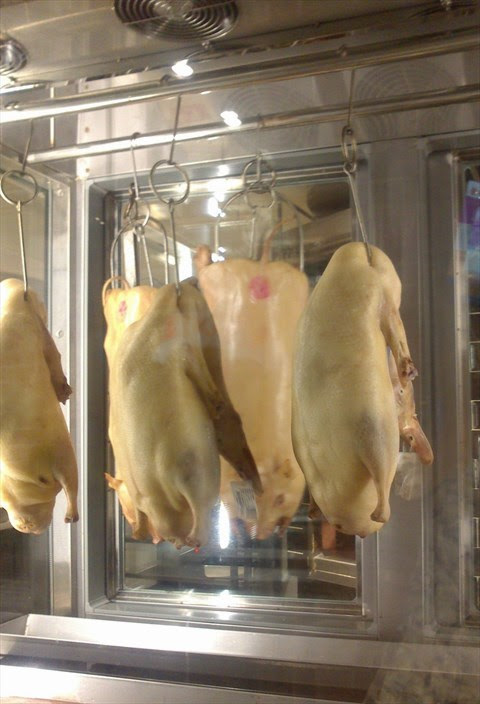 Looking at the menu (which can also be seen on openrice's desktop version), they do Sichuan dishes and the menu is really nicely designed and funky.
The food is served in a fancy way too.
★☆★☆★☆★☆★☆★☆★☆★☆
Chinese cabbage salad: 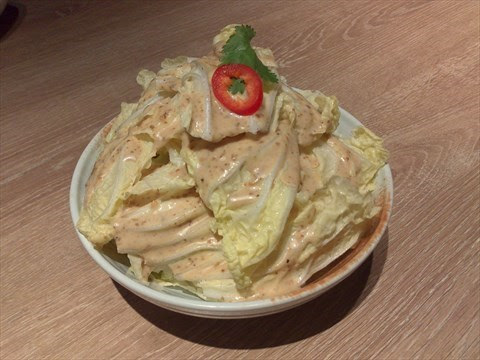 I liked this cabbage salad because it was a change from juicy lettuce.
The cabbage was also juicy but it was had a firm crisp sweet taste complemented by the sesame sauce.
★☆★☆★☆★☆★☆★☆★☆★☆
Beancurd drizzled in chili oil with black garlic: 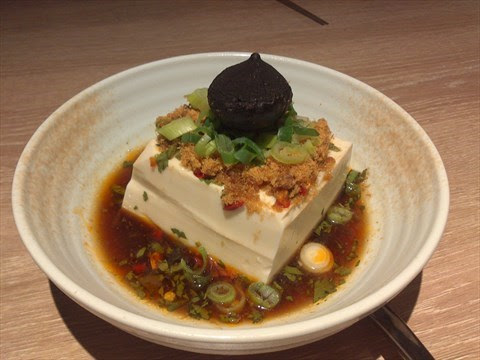 This was delicate beancurd in a spicy chili oil which warms up your stomach for the coming spicy dishes.
★☆★☆★☆★☆★☆★☆★☆★☆
Roast fish: Sour hot fish: 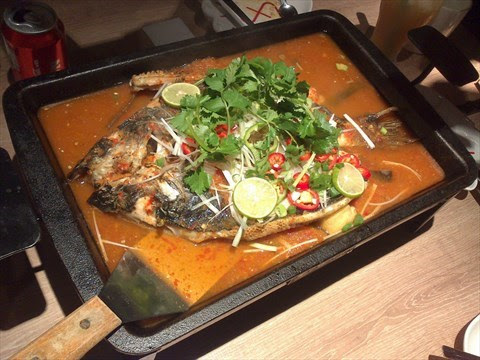 Fish lovers will love this.
A massive fish surrounded in amazing sauce rich in spices and herbs. 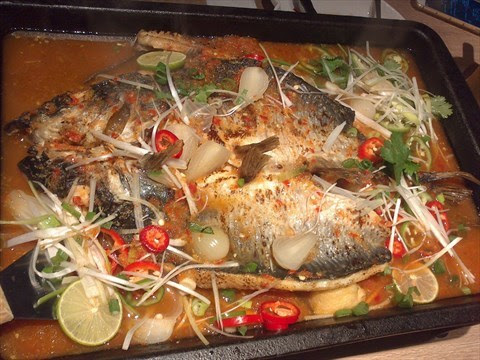 The lime in it made the fish really refreshing. 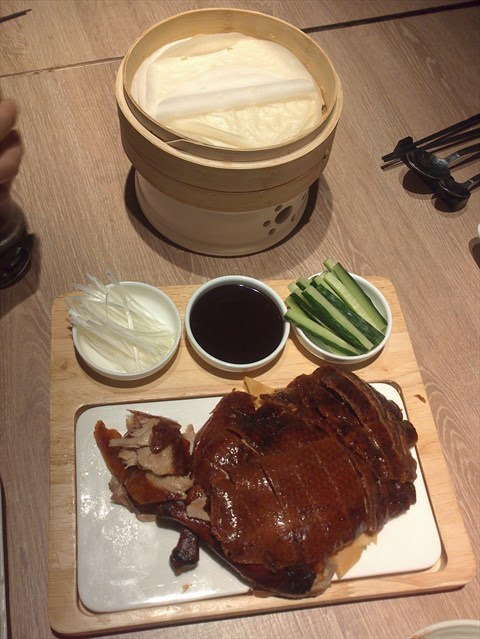 I love this Peking duck because duck, cucumber, spring onions and pancakes never fail and the duck was not that fat.
The pancakes were separated by a piece of grease paper which you can put on your hand without getting your hands dirty.
★☆★☆★☆★☆★☆★☆★☆★☆
Pepper salt duck: When you order the Peking duck you can have this add on where they cook the remaining bones in salt and pepper.
There are other choices you can choose from but salt and pepper was nice because it was crispy.
★☆★☆★☆★☆★☆★☆★☆★☆
Suckling pig: 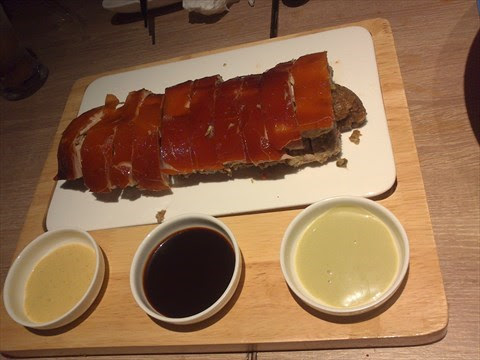 This was a suckling pig stuffed with glutinous rice served with three sauces: mustard, matcha and mustard.
The pork skin was crisp and the pork was soft and lean.
It was nice dipping it with the green matcha sauce because it was delicate and sweet which did not over power the pork.
★☆★☆★☆★☆★☆★☆★☆★☆
Dancing fish : 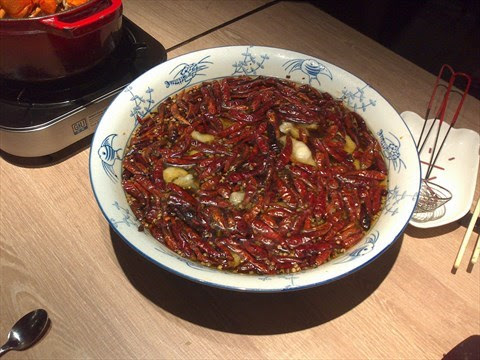 This is basically fish poached in oil and we were told the oil is only used once. 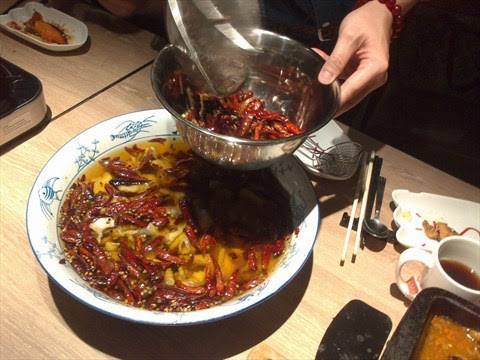 The fish is quite spicy and silky but the tasty potato noodles in the bowl were even more spicy. 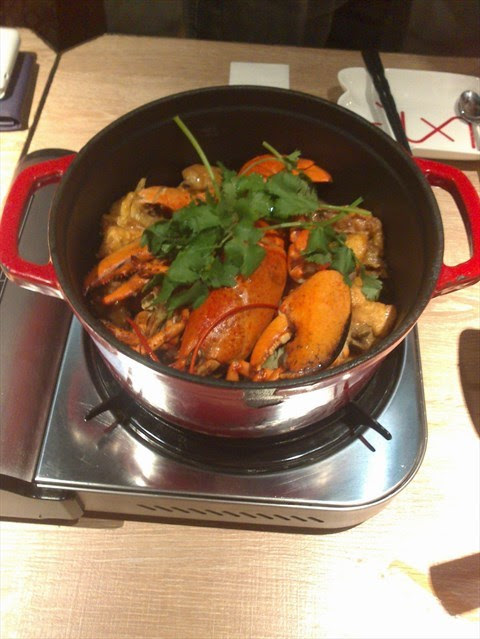 This was slices of Iwate pork which were blanched in the pot after we finished the lobster and chicken clay pot. 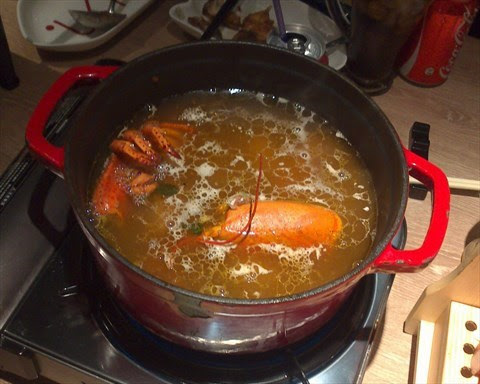 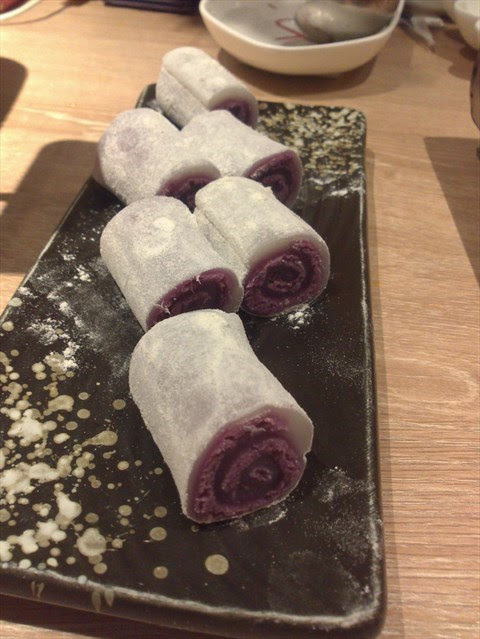 For desserts we had these pretty bean flour rolls which were soft and starchy filled with my favourite purple yam that was not too sweet.
★☆★☆★☆★☆★☆★☆★☆★☆
Posted by supersupergirl at Monday, August 10, 2015