Thanks to CJ for inviting me to try their newly opened Omakase restaurant in my favourite dining area Central.
To be honest I am not an expert in Japanese food.
There are so many different styles ranging from the type of food and different prefectures in Japan.
Before this tasting, I did not know anything about Omakase so I did not know what to expect.

I arrived and found the place really cosy and the main sitting area was the bar table in front of the chefs.
When I was led to my seat, I thought I was going to be assigned to the table but instead I was sat at the bar table.

The idea of Omakase restaurants is that you can interact with the chefs.

It took me a while to break the ice because I am not quite used to sitting in front of the chef.
But after a while I really started to enjoy the omakase because the chef was really friendly.

To begin with, we had kelp and finely grated radish strands placed in front of us.
They were there as refreshers when the sashimi got a bit heavy.

I found it quite amusing that every time I had some kelp or radish, the Chef would put it neatly back in a pile for me again.
There was FRESHLY GRATED wasabi too which I saw him patiently grate.
It was the first time I tried it and it tastes so much better without a strange aftertaste and it had natrual wasabi fibre pieces in it too.

We began our Omakase journey with an appetizer. 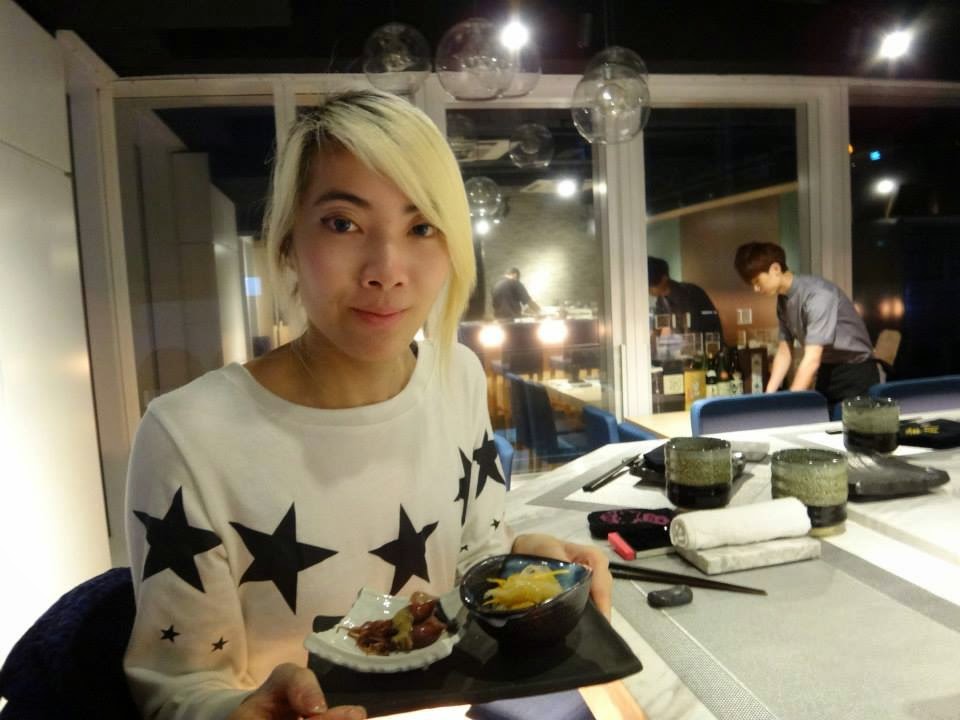 It was fried fish with a side of fluorescent squids.
The fried fish was topped with grated carrots and onions drenched in lemon juice which was a great start because I love lemon and it was so appetizing.
After having the fish I moved on to my favourite squids!!
Usually they are salty because they are fermented but these were fresh and much softer too.
I could taste its natural taste complemented by the light miso sauce.

++++++++++++++
Next we had steamed egg which was gorgeous.
It was served in a really nice bowl with a straw string handle and a cute wooden spoon.

According to the chef, it was slowly steamed for more than 20 minutes and controlled so that it does not get hotter than 85 degrees.

As you can see, there were so much vegetables, crab meat, gingko nuts and other goodies in it.
The egg was so smooth and on top of it, there was a some clear light gravy which enhanced the taste even more.
++++++++++++++
Now, it was sashimi time!!
I only realised halfway through that it was sashimi because it was not all served on the plate together but one at a time.

Started off with Hiroshima oyster which surprised me because I did not know it was considered as sashimi but anyway, it was fresh and complemented by a choice of not one but two sauces: Ponzu or Cocktail sauce.
Both were great but I preferred the ponzu because it was lighter.

It was by this time I realized we were having sashimi because Omakase style is freestyle so it can be served in any creative way!
I loved the crabmeat with thick crab roe paste and the sea urchin powder because they did not need any other flavourings as they all complimented each other nicely.

After having the hairy crab, we were served flounder fish topped with white truffle oil, salted konbu flakes and spring onions.
It was really nice and tasted like black truffle because of the salted konbu!

Then came the last piece of sushi which was the fatty Toro!
I was not particularly keen on it but after I tried it, the crispy seaweed complemented it so well that it was not oily.
It was a piece of toro on top of a shiso leaf topped with fresh wasabi and lime juice.

Then it was wrapped in seaweed to be quickly devoured before the seaweed goes soft.

The toro was so good because I loved the lime and fresh wasabi and the crispiness of the seaweed distracted you from the oiliness while it also gave it an extra savouryness.
++++++++++++++
After the sashimi, it was time for soup!!
I was really impressed that my tea was magically refilled because every time I took a sip, it was hot.
Hot green tea is a must for me because it really keeps my appetite going.

Then came the konbu soup, it had a huge clam in it with these Japanese herbs that taste lighter than Chinese celery.

1-The first sushi started off with flounder fish edges topped with refreshing apple and vinegar jelly.

2-Sayori (Halfbeak) topped with ginger.
I could also smell strong fragrant yuzu too.

The taste was really interesting because Myoga has a hint of ginger which did not over power the fish.
Myoga is a Japanese ginger with a distinctive ginger taste and spring onion texture.

4-Then came my favourite, it was scallop sprinkled with salt, dressed with lime juice and yuzu pepper.

5-Ark Clam
The ark clam was grilled with charcoal salt which gave it an interesting smoky taste yet the ark clam itself was sweet.

6-Boton shrimp with prawn head matter
The pairing for this was good because the prawn matter has a really nice strong taste that flavours the prawn well.

7-kinmedai
This was fun to eat because it was dressed with refreshing balsamic and the rice crispies gave it an extra crunch factor.

8-This was gunkan with scallop muscles mixed with mentaiko.
The mentaiko was slightly spicy and salty which gave the scallops muscles an extra depth.

9-Sea urchin
Clearly this did not need any other flavourings, the sea urchin was sweet and creamy!
Very satisfying.

10-Last but not least!! Torched toro with spring onions!!
It just melted in my mouth!!!

After having the sushi, tempura was next.
[Please note the portion size is slightly bigger than the actual portion because it was for sharing at this tasting]
There were prawns, mushrooms, sweet potatoes and aubergines.
The fried flower tasted quite interesting because it had a nice bitter note.

To finish off before dessert, we had miso soup!!

I was really looking forward to dessert because CJ highly recommended it.

When I got home I googled for Omakase to see what it was and the Chef definitely fulfilled the Omakase experience.

Quoted from Wiki:
Omakase is a Japanese phrase that means "I'll leave it to you" (from Japanese "to entrust"). In American English, the expression is used at sushi restaurants to leave the selection to the chef. The chef will generally present a series of plates, beginning with the lightest fare and proceeding to heaviest, richest dishes.
The phrase is not exclusive to service of raw fish with rice, and can incorporate grilling, simmering, or other cooking techniques as well.
Customers ordering omakase style expect the chef to be innovative and surprising in the selection of dishes, and the meal can be likened to an artistic performance by the chef. Ordering omakase can be a gamble; however, the customer typically receives the highest-quality fish in stock at a less expensive cost than if it had been ordered à la carte.
Posted by supersupergirl at Wednesday, March 19, 2014