Festive Lunch at the Historic Pawn


As this is my 3000th review, I might as well write something special for it.

This review also coincides with my recommendation to spend Christmas at The Pawn on 「細味」which costs $2 at your local 7-11. 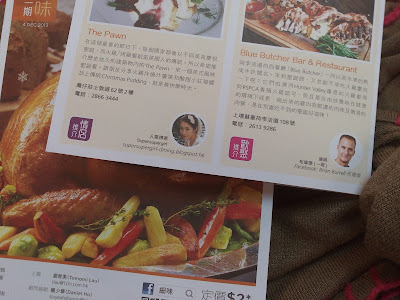 Since many people have requested some Chinese on my 3000th review, I might as well copy and paste the edited sentences from「細味」, please see below!~.

I have always been curious about The Pawn because the building is Historic.
Many expats go there for British food, the British magazine Time Out held their opening party there and Richard Ng 吳耀漢 who has lived in the UK was interviewed there too for some local TV Chit Chat.

Before this tasting, I was lucky to be invited to the The Pawn Roof Top market which had food stalls from The Pawn, The Principal, The News Room, SML and Classified.
It was a great day with the sun shining and beautiful views of Wan Chai city from the roof top.

For the festive lunch, it was on the second floor which is served from now till Christmas and there is Festive dinner too which can be found on their website/Fb.

I loved this crispy soft yeasty bread which was delicious after putting butter on it and the salt provided.
★☆★☆★☆★☆★☆★☆★☆★☆★☆★☆★☆★
Potted blue swimmer crab with pickled fennel and wheatbread toast:

There was quite a generous amount of crab on the toast which seemed to be mixed with butter, but the pickled fennel on the side was really acidic and balanced the heavyness of that.
★☆★☆★☆★☆★☆★☆★☆★☆★☆★☆★☆★
Roast turkey, pigs in a blanket, cranberries, brussel sprouts, roast potatoes and sage turkey gravy:

Now to my favourite part of the meal!!
The turkey was tender and juicy complemented by the sweet and sour cranberries.
Although it does not state there is stuffing on the menu, I found a huge piece of stuffing which was heavily soaked in wine.
The Stuffing is the best part of roast turkey because it is really tasty with lots of herbs.
Eating the stuffing, turkey and cranberry together was delicious.
★☆★☆★☆★☆★☆★☆★☆★☆★☆★☆★☆★
Traditional Christmas pudding with brandy vanilla custard:

Last but not least, the strong Christmas pudding was paired perfectly with brandy vanilla sauce which lightens the taste of peel.
★☆★☆★☆★☆★☆★☆★☆★☆★☆★☆★☆★
Here is the brief Chinese version for this review


Even though its my 3000th review I will keep posting my dining experiences.

People will probably think that I express my views to get tastings, but I have been expressing my views way before tastings became popular these two years.
If I did intend to get tastings I would have disclosed my contact information right from the beginning in 2006.

Tastings have only become popular these two years because restaurants have found it more effective in terms of showcasing their dishes because everyone uses social media such as FB/instagram/OpenRice/blogs etc.

Personally for tastings, I liked to feature more on the taste, photos and less on the price because it would be quite promotional and others at the tastings with me would have written the price so readers will be able to find it easily.

However with photos you can judge on the size and quality of the food, but in some cases portion sizes will vary because they just made it bigger so that everyone could try some.
In some cases, it would be an appetizer or mains shared between a few people during tastings but the readers don't see that because they are not present!

Some people choose to spend their time hiking, shopping, exercising while I spend some of my time expressing my views on food because I am quite passionate about eating and I love to eat!

To be honest, if I was hoping for this 3000th review to be recommended by OpenRice I would have written it on a non tasting review because Tastings do not get recommended on OpenRice as it is just a showcase of dishes from the restaurant.

Hopefully I have not been too straight and offended anyone here!
Posted by supersupergirl at Thursday, December 05, 2013