Thanks to Maya Cafe for letting me sample this five course vegetarian meal for Christmas.

Before I tried the meal, I tried their a drink from their winter juices menu.
There were two that caught my attention:
Celebration and Heartbeet! but the other names were stylish such as Reboot! 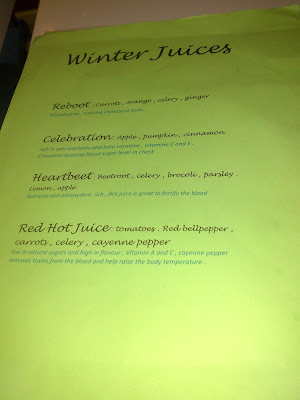 In the end I chose Celebration because it was festive and it had pumpkin which reminded me of Thanksgiving. 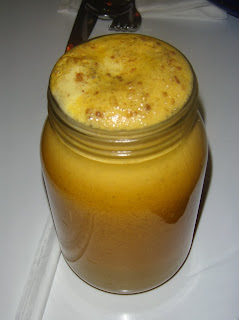 Official Christmas menu (which was slightly different to what I tried: 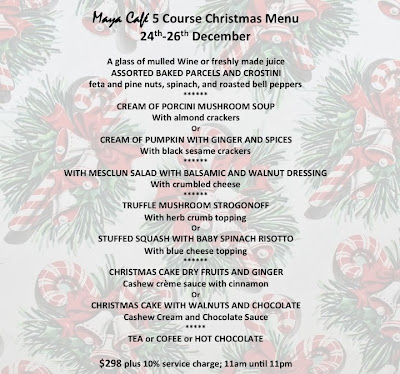 Here was what I had in the five course meal: 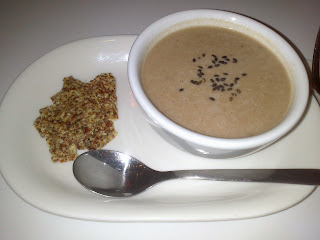 This was cream of porcini soup served with almond crackers. The soup had a nice consistency that was not too thick or thin with a nice kick of black pepper in it.
★☆★☆★☆★☆★☆★☆★☆★☆★☆★☆★☆★
Savory puffs: 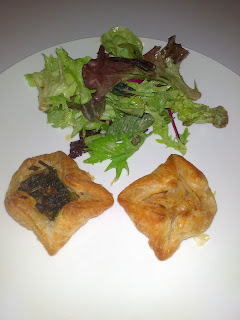 Next I had the puffs which were both delicious, one was spinach and the other was potato. They were both amazing because it was spiced with my favourite cumin.
The salad on the side was also good because is was dressed in sesame sauce.
★☆★☆★☆★☆★☆★☆★☆★☆★☆★☆★☆★
Baked veg au gratin: 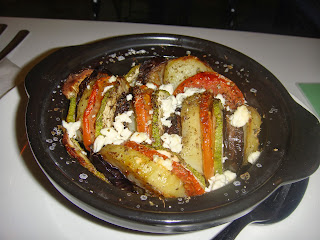 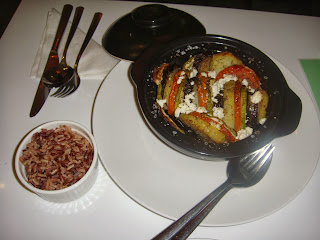 A wholesome pot of sliced vegetables sandwiched together and baked in delicious olive oil with feta cheese on top!!
This was simple and delicious paired with healthy nutritious red rice.
★☆★☆★☆★☆★☆★☆★☆★☆★☆★☆★☆★
Dessert: 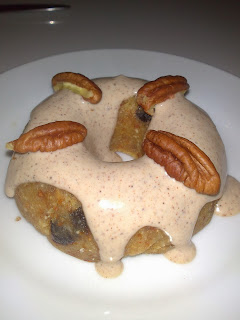 Lastly, there was dessert, it was a lovely moist cake made with coconut and flavoured with orange blossom water drizzled with cashew nut sauce.
★☆★☆★☆★☆★☆★☆★☆★☆★☆★☆★☆★
Hot Chocolate: 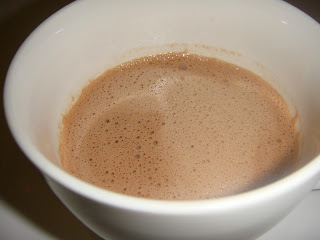 There is a drink included and I was recommended the hot chocolate which is raw cocoa that had a rich strong taste.
★☆★☆★☆★☆★☆★☆★☆★☆★☆★☆★☆★
As well as the five course meal, I also tried the Chia seeds pudding which is interesting because it was nutty and light with a nice berry taste. 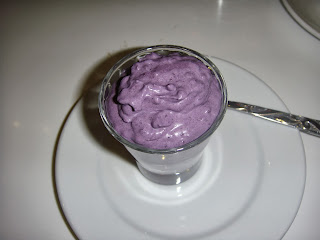 For new years eve they will have something special, featuring live dancing and mezzesl!! 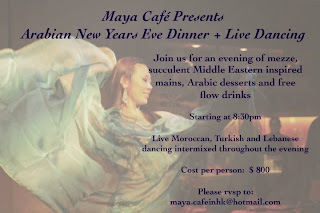 Email ThisBlogThis!Share to TwitterShare to FacebookShare to Pinterest
Labels: Vegetarian