When I walked past Maxim's this cake caught my attention, it looked 98% like the Rainbow connection cake at Mrs B's Cakery.
The colours, fruits and marshmallow are practically the same but arranged in a different order!
Maxim's is called Happy Rainbow, while Mrs B's is called Rainbow connection.
So $198 vs $590.
I am tempted to try it, but I have a feeling it looks better than it tastes, and I would probably prefer the one at Mrs B's more! 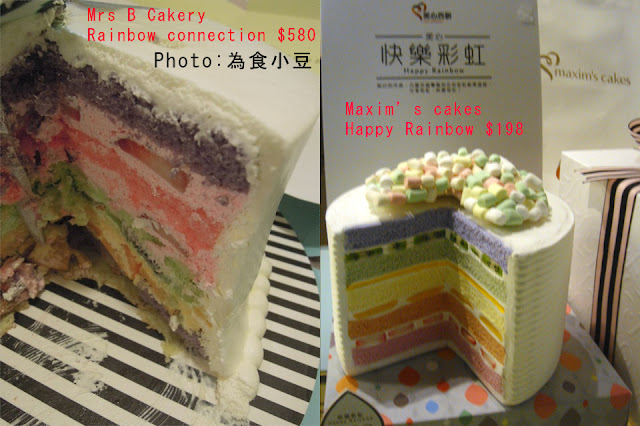 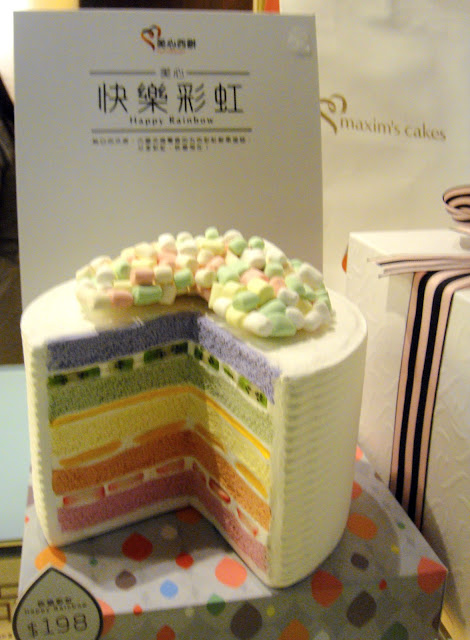 Maxim's have launched a new cake called the Happy Rainbow, I found out because of their model replica of the cake on display with the different coloured layers.
The model is really pretty and shows the different layers.

Immediately, I associated it with Mrs B's Rainbow Connection which I have always wanted to try but it costs about $580 for the cake.
As well as the replica model, Maxim's have also forked out on promoting this budget cake with a local star and even having advertisements at MTR stations.
However on the poster, the thickness of the cake layers are thicker than the real thing and the model replica and there is less cream too.
This cake is cheaper than their chocolate cakes but then the ingredients are simpler, just colouring, marshmallows, cake and fruit!

The Maxim's version only costs around $198 with further discounts from specific credit cards.
A good way to get rid of those red Maxims cash coupons given from wedding invitations too!!!
Although I have not tried Mrs B's, I have the feeling that Mrs B's should taste nicer judging by their smaller cakes I have tried. The different layers should have different tastes.

Both are covered in white cream and decorated with coloured marshmallows.
Both have sliced pieces of strawberries, mangoes, kiwis in one of their layers.
★☆★☆★☆★☆★☆★☆★☆★☆★☆★☆★☆★
As for the packaging, the Ribbon Maxim's used was quite similar to the striped ribbon at Mrs B's.
Mrs B's Ribbon
http://static3.orstatic.com/UserPhoto/photo/3/2PI/00J9CY6F030CE1E8F0EF06l.jpg
Maxim's Ribbon

On one of the layers there was orange marmalade with orange peel.

Overall the cake was fun to eat and tasted better than their traditional cream cakes with canned fruit!
If the cake layers had more distinctive flavours then it would not feel so artificial because of the colours.
From the top layer down, there is a layer of sliced strawberries, the next fruit layer is mango, then orange marmalade with orange peel, and then kiwi.
★☆★☆★☆★☆★☆★☆★☆★☆★☆★☆★☆★
The cake knife that they supply you is no longer the ivory coloured triangle shaped spatula but a pretty clear plastic cake knife.